This is the VOA Special English Agriculture Report.

South America's Amazon is the largest tropical rainforest and river system on Earth. But the Amazon is disappearing at the rate of about eight hundred thousand hectares a year. This deforestation is caused by an increase in agriculture and cattle ranching and the building of roads and dams. Another cause is the illegal cutting of trees for logging companies.

Now, a new study says ancient Amazonian farming methods could offer valuable lessons for today. The study looks at the pre-Columbian period. Christopher Columbus and other European explorers began arriving in the Americas in the late fourteen hundreds.

The researchers studied a coastal wetland area where ancient farm beds and canals remain unchanged. The site is in French Guyana. 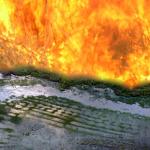 Raised fields in French Guyana that remain much as ancient Amazonian farmers left them. The simulated flames represent the European slash-and-burn agriculture that came afterward.
A widely held belief is that pre-Columbian farmers used a great deal of fire to manage Amazonian ecosystems. But the scientists say their study calls this idea into question. It shows that raised-field farmers limited their burning to improve agricultural production.

Jose Iriarte from the University of Exeter in England was lead author of the study. Mr. Iriarte says fire results in the loss of important nutrients for crops. When land is not being used for farming, periods without fire are most effective in rebuilding soil organic matter and preserving soil structure. "So in this sense," he says, "we interpreted that they were limiting fires because it was better to grow crops in these raised field systems."

He says this fire-free method by the pre-Columbian farmers helped change the seasonally flooded savanna, or grassland, into productive cropland. Raised fields provide better drainage and soil aeration and also hold moisture during the dry season.

This fire-free method of agriculture would have been labor intensive. It ended when up to ninety-five percent of the native people died from diseases brought by the Europeans. Mitchell Power is curator of the Natural History Museum at the University of Utah.

MITCHELL POWER: "Once the Columbian encounter happens, we don't see that type of agriculture any more. We start to see increased burning and a shift towards dry-land farming. So people were then clearing forests and making their raised beds in the forests. And so, what we think is happening is that there was a huge demographic collapse in this region."

The European colonizers brought slash-and-burn methods of agriculture that remain a threat to the rainforest. Experts say at current rates, more than half of the Amazon's tropical rainforest could be gone by twenty-thirty.

The study is in the Proceedings of the National Academy of Sciences. You can find a link at 51voa.com. And that's the VOA Special English Agriculture Report. I'm Jim Tedder.