Across Colorado, rivers are at some of their lowest levels on record. But on one river in the northeastern part of the state, the water is not too low to enjoy. Happy children and guides still float down the river in blue rafts - rubber or plastic boats filled with air.

The Cache La Poudre River is full of rafters and boaters enjoying the water while they still can. Businesses are fighting for survival in a season threatened by drought. 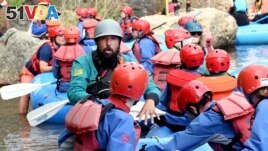 Kyle Johnson’s rafting company, Rocky Mountain Adventures, has been running full river trips seven days a week. Johnson recently told The Associated Press, “Any time that you make your living off of Mother Nature, you definitely partner with a pretty turbulent environment.”

Turbulent means not stable or steady.

Johnson said the increased demand on the river is a “redemption” from the last rafting season, which was cut short by the coronavirus pandemic and wildfires. But the healthy water levels on the river might not last much longer. Johnson said the drought could end this season early as well.

Colorado resident Savannah House recently floated down the Poudre. Noting the extreme weather in many parts of the state, House described her experience as “a little bittersweet."

For years, those who depend on rivers and streams to make a living have struggled with hotter, drier weather brought on by climate change.

Now the heat wave is deepening worries and affecting even simple outdoor activities.

The Yampa River in northwest Colorado is experiencing some of the lowest water flows on record because of below average snowfall, increasingly dry soil, and the spring’s hot, dry weather.

In Steamboat Springs, which is located on the river, rafting and kayaking ended a few weeks ago. Fishing and tubing could also end soon if the water goes much lower. Tubing is an activity that involves riding a tube, a round object that holds air, down a river.

Kent Vertrees of Friends of the Yampa recently told the AP, “We have known since 2002, when this mega-drought started, that our climate has shifted to a hotter and drier future. And the future is now.”

The group has received financing from the Walton Family Foundation, which also supports The Associated Press’ reporting on water and environmental policy.

To help with the dryness, environmental groups and water agencies created a pathway to release water from a reservoir - a large lake used as a source for water. The move helped “keep the fish wet, cool the river down and increase the oxygen levels in the river,” Vertrees said.

Cottonwood trees have also been planted to block the sun and cool the river down when the water runs low. So far, though, it is unclear what effect such measures will have on water levels.

Brittany Peterson and Thomas Peipert reported on this story for the Associated Press. John Russell adapted it for Learning English. Bryan Lynn was the editor.

drought – n. a long period of time during which there is very little or no rain

redemption – n. the act of making something better or more acceptable

kayaking – n. the act of riding a long narrow boat that is pointed at both ends and that is moved by a paddle with two blades

shift – v. to change something