VOA Special English
At 60, Peace Corps Plans Return to World after Virus
Update Required To play the media you will need to either update your browser to a recent version or update your Flash plugin.
By Gregory Stachel
2021/8/26


The Peace Corps is a U.S. government program that places young Americans in under-developed countries around the world to help with small projects. This year, it is turning 60.

Last year, it had 7,000 volunteers in 62 countries when the coronavirus broke out. The volunteers were given little time to leave their countries to go back to the United States.

Since its creation in 1961 by President John F. Kennedy, more than 240,000 Americans have served as Peace Corps volunteers in many countries. The goal is to help countries meet their development needs with programs, from education to health and agriculture. It does this while helping to spread a better understanding of Americans.

Cameron Beach was a volunteer living in rural Malawi, a landlocked country in southern Africa. Nine months after the COVID-19 pandemic started, she came back to Malawi. She is living off her savings.

Beach said on an online call, “It was especially painful for me because I was given 24 hours to leave a place that I’d called home for almost two years.”

Beach was trained to speak Chichewa. She was teaching at the Mkomera Community Day Secondary School in Dedza, found about 40 kilometers southeast of the Capital, Lilongwe. She is 25 years-old and from Greenville, South Carolina. She said she would “absolutely” rejoin the Peace Corps if it became possible. 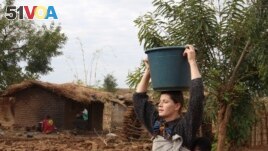 Cameron Beach, carries a carries a container of water on her head collected from a communal water gathering site in Dedza, near Lilongwe, Malawi, Friday, July 23, 2021. (AP Photo/Roy Nkosi)

It might: the organization hopes to begin returning volunteers to the field late this year or early next year.

Peace Corps volunteers would be required to be vaccinated. And sending them back will depend on the situation in each country.

Acting Peace Corps Director Carol Spahn told The Associated Press that among the recalled volunteers, about 2,400 said they wanted to go back when it is possible. There are 10,000 people who are interested in joining the Peace Corps now.

How soon they can go back depends on the worldwide fight against the virus, the new delta variant, and the slow rollout of vaccines in developing countries.

Spahn believes it will be a few years before the Peace Corps is back to its full strength. While volunteers have been removed from some countries in the past, March 2020 was the first time the Peace Corps brought home all its volunteers at the same time.

Heading back overseas will be difficult. There will be required training and rebuilding of programs. Areas that have few returning volunteers will also lose the organizational, cross-cultural, and knowledge that is passed on.

Service in the Peace Corps is usually two years after a training period. During the pandemic, most Peace Corps workers remained in place, and some kept up some programs. Some former volunteers worked remotely on development projects from the United States, receiving a small payment for their work.

Spahn said a few volunteers refused to leave. Their Peace Corps service was ended. Despite their short service, those volunteers can still receive the benefits given to those who complete two years. They include moving payments, money for school, and better placement in federal jobs.

Spahn said those former volunteers, like Beach, could help bring in a renewed Peace Corps.

Beach is now teaching her English classes and is helping to build part of a school in part with money given from Peace Corps. While she was away, her students found it difficult without her.

“The time when Madam Beach left Malawi, lots of things went wrong especially in our class,” said Aness Leman Filimoni, who is in her last year of high school. “Madam Beach was teaching us English but when she left, the school could not find a suitable replacement.”

Wilson Ring and Roy Nkos reported this story for The Associated Press. Gregory Stachel adapted it for VOA Learning English. Susan Shand was the editor.

volunteer – n. someone who does something without being forced to do it

absolutely – adv. used in speech as a forceful way of saying “yes” or of expressing agreement

variant – n. something that is different in some way from others of the same kind

suitable – adj. having the qualities that are right, needed, or appropriate for something