Fans are not permitted into most places where Olympic events are taking place in Tokyo.

But the Games are still going on.

Many sports fans have been waiting a long time for the Olympics to return to Japan. What are they to do?

It turns out that Japanese fans are getting creative.

Recently, one cycling fan climbed a high road to run next to Richard Carapaz of Ecuador during the men’s road race. Carapaz said he did not mind seeing the fan, who was wearing very little clothing, run with him up the hill. 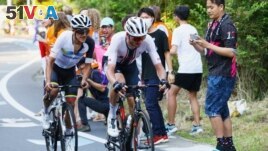 Carapaz smiled at the fan and later won the gold medal.

“It gave us a sensation of somehow coming back to normality, seeing the fans there,” Carapaz said later. “I loved it.”

Fans are restricted from entering stadiums and other places where the athletes are competing. Police and volunteers are looking out for people who do not have permission to be there. Athletes, coaches and reporters are wearing face coverings when they are near other people.

But some of the events are taking place outdoors on roads and waterways.

Even during the opening ceremony last week, fans lined the roads on the way to the stadium to cheer for the athletes as they passed in buses.

For the new event of surfing, which takes place in the ocean, fans went to the beach to watch from the other side of a plastic barrier. The fans could not see the event well, but they seemed happy to be there.

Other people found a way to watch the Olympic skateboarding competition. It was supposed to happen in a stadium where 7,000 people could watch. Instead, no one was there. But some fans found a way to see the Japanese skateboarders Yuto Horigome and Momiji Nishiya win gold medals in their events.

Two little girls came to watch and said they had to stay away from security guards who would “scold” them for getting too close.

Some people brought binoculars so they could see the skateboarders from a long distance.

One person, Tamura, said the decision to ban fans was understandable but “sad.”

Another, Shogo Miyamoto, works in Kyoto. He came to see some of the Olympics because “it is something that you wouldn’t have in your home country twice in your life. Maybe not even once. That’s why I wanted to come explore the venues.”

There are some other chances for fans to see events. For example, the golf course has a lot of trees, but fans could look through the trees to see golfers like Japan’s Hideki Matsuyama, who won The Masters golf championship in the U.S. earlier this year.

At Odaiba Marine Park, some fans recently watched the triathlon. Swimmers will compete in the open-water events in the same place.

People who like to watch runners will be able to see the marathon in Sapporo, a city about 1,000 kilometers from Tokyo. Although fans are not permitted, it will be hard for security guards to clear the whole path of the race which covers 42 kilometers.

The cycling events are being held in a place known as a track or velodrome, outside of Tokyo in Izu. It is far enough outside of Tokyo that it is does not have the same restrictions. Over 1,000 people will be able to watch at the velodrome each day.

One athlete said she will be happy to have the support of fans.

Laura Kenny of Great Britain has four gold medals in track cycling. She said she was “gutted” when she heard there would be no fans.

Now that she knows fans will be there: “I’m glad to have some people coming in,” she said.

Dave Skretta wrote this story for the Associated Press. Dan Friedell adapted it for Learning English. Mario Ritter, Jr. was the editor.

Would you try to see some of the Olympics even if you were not allowed? Tell us in the Comments Section and visit 51VOA.COM.

turn out –phrasal verb to happen, end or develop in a particular way

medal –n. a piece of metal with designs and words on it given to honor a special event, a person or a victory in a competition

coach –n. a person who teaches and trains a sports competitor, performer or similar person

stadium –n. a very large building, often without a roof, that has a large open space for sports and performances

surf –v. to ride on an ocean wave using a flat piece of equipment

scold –v. to speak in a critical or angry way to someone who has done something wrong

binoculars –n.(pl.) a device that is held up to the eyes to see things that are far away

venue –n. a place where an event takes place

athlete –n. a person who is trained in or good at sports, games, or exercises that require physical skill and strength