Christian clergy have long provided counseling or religious services in hospitals, prisons, and homes for the sick and ill in the United States. They are often called chaplains.

Now, Buddhist chaplains are leading an ever more diverse number of religious counselors that includes Muslims, Hindus, and others.

In Portland, Oregon, Skylar Freimann has a terminal heart condition and other illnesses. There to guide her along was Rev. Jo Laurence, a Zen Buddhist who has years of practice and training to support end-of-life patients. 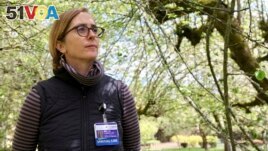 Rev. Jo Laurence, a Buddhist chaplain, poses for a photo on April 22, 2022 in the garden of a memory care facility in Portland, Ore. before visiting hospice patients to offer spiritual care. (AP Photo/Gosia Wozniacka)

Rather than appealing to God or a Christian prayer, Laurence talked of Eastern spiritual traditions: "The body can weigh us down sometimes," she counseled. "Where is the divine or the sacred in your decline?"

Buddhists say they are well-positioned for the times. They appeal to people from different cultural and religious backgrounds - including people who identify as non-religious. A growing number of Americans — roughly one-third — are non-religious.

Buddhist study and training programs have been established or have grown in recent years. They include the Buddhist Ministry Initiative at Harvard Divinity School and the Buddhism track at Union Theological Seminary, among others.

Monica Sanford, an ordained Buddhist minister, is a school official with the Multireligious Ministry at Harvard Divinity School. She said, "The programs keep expanding, so it seems clear that there's a growing demand from students. And the students appear to be finding jobs after graduation."

In the past, Buddhist chaplains were often hired by hospitals and police departments to work with Asian immigrant communities. During World War II, they served Japanese American soldiers in the military. Today, however, they work with many different Americans.

In a first-of-its-kind report published this month, Sanford and another researcher identified 425 Buddhist chaplains in the United States, Canada and Mexico. The chaplains represented all major branches of Buddhism. However, the researchers say there are likely many more. More than 40 percent work in health care. Others serve in schools, prisons, or as self-employed counselors, the researchers found.

Leigh Miller is the director of academic and public programs at Maitripa College, a Tibetan Buddhist college in Portland. She has seen increased interest in its Master of Divinity program since its launch 10 years ago.

Hospitals and other institutions are interested in hiring Buddhist chaplains, Miller said, to increase staff diversity. Buddhist chaplains, she added, are also good at relating to others using inclusive, neutral language, while Christians "fall back on God language, leading prayers or reading Bible scriptures."

Meanwhile, training in mindfulness and meditation, as well as beliefs regarding the nature of self, reality, and the impermanence of suffering, give Buddhists special tools to deal with pain and death.

Providence Health & Services is a Catholic nonprofit based in Washington state that runs hospitals in seven Western states. Mark Thomas, a chief mission officer in Oregon, said the hospital system employs 10 Buddhist chaplains not despite but because of its Catholic identity. The goal is to make sure patients get good spiritual care however it best suits them.

Thomas said many patients like or feel connected to Buddhism or Buddhist practices. He said practices like meditation have been valuable in helping patients deal with suffering.

Gosia Wozniacka reported on this story for The Associated Press. John Russell adapted it for VOA Learning English.

divine -- n. relating to or coming from God or a god

ordain—v. to officially make (someone) a minister, priest, rabbi, etc.

graduation – n. the act of receiving a diploma or degree from a school, college, or university

mindfulness – n. the practice of being aware of something - thoughts, feelings, sensations, etc.

impermanence —n. the state of not lasting forever :

practice – n. something that is done often or regularly