Africa's Sahel is seeing the worst effects of climate warming anywhere on the planet, says the United Nations, or U.N.

The Sahel is a region of western and north-central Africa that stretches from Senegal to Sudan.

Because 80 percent of the region’s economy is from agriculture, farmers in the Sahel are suffering from the severity of climate change. 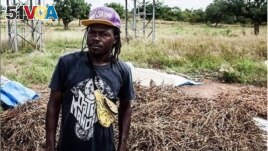 Burkina Faso rapper/farmer Art Melody is seen in an undated photo from his Instagram page. The caption on it reads: Farmer by day, rapper by night.

Art Melody is a musician in the nation of Burkina Faso, which sits in the Sahel. By day, he is a farmer. By night, he raps in the local Djula and Moore languages. As a farmer, he knows from experience what is happening to the crops. His songs express the fear and emotion felt by millions of people across the region because of climate change.

Art Melody says his grandparents have told him the rainy season used to start in April. But now, it can start as late as July, so there is less rain and more heat.

The Sahel has been experiencing both desertification and drought. Desertification is a process by which dry land turns to desert as its quality declines over time. Drought is a long period of time during which there is little or no rain.

The U.N. says the effects of desertification and drought on farmers is partly to blame for the Sahel conflict, which involves the nations of Burkina Faso, Mali and Niger. Combatants include terror groups linked to the Islamic State and al-Qaida.

More than two million people have been displaced because of the fighting. And more than 20,000 people have been killed since 2012. That information was gathered by a nonprofit group called the Armed Conflict Location & Event Data Project.

"When there's a drought, it's a disaster, it's hell," said Ibrahim Thiaw. He is executive secretary of the U.N. Convention to Combat Desertification. "When that situation happens, you have two options — flight or fight. Either you flee because there is no way you can produce anymore, or you fight with your neighbors for the limited resources that are still there."

Conflicts often arise between ethnic groups that traditionally grow crops and those that raise farm animals. That is because the land usually cannot be used for both purposes.

While that is a major barrier, new methods and technologies can help combine agricultural production with animal farming, says Marc Gansonre. He is a representative of a Burkinabe farmers’ union.

As for Art Melody, his songs attempt to raise awareness of the difficulties the farmers are experiencing. He says if people's eyes are closed, they will always end up destroying everything, whether it is plants or human relationships.

Melody has been spreading his message around the world through his music since the early 2000s. He released his latest record last month. He has appeared at performances with world famous Benin-born singer Angelique Kidjo and Nigerian musician Seun Kuti, son of Fela Kuti.

region – n. a part of a country or of the world that is different or separate from other parts in some way

grandparent – n. a parent of your father or mother

option – n. something that can be chosen

union - n. an organization of workers formed to protect the rights and interests of its members

awareness - n. the act of knowing that something (such as a situation, condition, or problem) exists