VOA Special English
Cave Paintings Show Neanderthals Were Artists
Update Required To play the media you will need to either update your browser to a recent version or update your Flash plugin.
By Jj
2021/8/15


A new study suggests that Neanderthals made art far earlier than once believed, perhaps some 20,000 years before the appearance of modern humans in Europe.

The recent study, which appeared in the Proceedings of the National Academy of Sciences (PNAS), suggests Neanderthals used a red ochre pigment, a kind of red, earthy paint, to make cave art some 65,000 years ago. 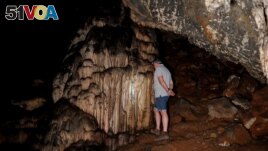 A guide looks at red ocher markings which were painted on stalagmites by Neanderthals about 65,000 years ago, according to an international study, in a prehistoric cave in Ardales, southern Spain, August 7, 2021. (REUTERS/Jon Nazca)

Modern humans did not exist in Europe at the time the cave images were made.

The paintings in the Caves of Ardales, near Málaga in southern Spain, add to increasing evidence that Neanderthals, who died off about 40,000 years ago, were more complex than is commonly believed.

Pigments - natural coloring materials - were made in the caves at different times up to 15,000 and 20,000 years apart, the study found. Earlier research had suggested that the pigments were the result of natural processes rather than being man-made.

Joāo Zilhāo was one of the authors of the study. Zilhāo said dating methods showed that ochre had been spat by Neanderthals onto stalagmites, possibly as part of a ritual.

Stalagmites are pointed pieces of rock that stick up from the floor of a cave.

Zilhāo suggested that the study helps to change our opinions, or attitudes, about Neanderthals.

“They were closer to humans. Recent research has shown they liked objects, they mated with humans and now we can show that they painted caves like us,” he said.

Wall paintings made by early modern humans, such as those found in the Chauvet-Pont d’Arc cave of France, are more than 30,000 years old.

Graham Keeley reported on this story for Reuters. John Russell adapted it for VOA Learning English. Susan Shand was the editor.

spit – v. to force (something, such as food or liquid) from your mouth

ritual – n. a formal ceremony or series of acts that is always performed in the same way