China has put in place a new policy that limits online video game playing for young people to three hours a week.

The new rules restrict online gaming for those under age 18 to one hour in the evening on Fridays, weekends and public holidays.

The restrictions took effect on Wednesday. They were announced by China’s National Press and Publication Administration, NPPA. That agency is responsible for regulating video games.

The new rules place the responsibility for carrying out the policy on the gaming industry. The limits do not include punishments for individual gamers.

China is the world’s largest video gaming market. The Chinese government has worried for years about young people becoming addicted to games. Treatment centers have been set up in the country for people thought to have developed “gaming disorders.” 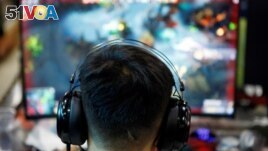 A man plays online game on a computer at an internet cafe in Beijing, China August 31, 2021. (REUTERS/Florence Lo)

In 2018, Chinese officials also expressed concerns that gaming might be causing rising rates of eyesight problems among young people.

The NPPA said the new limits were issued to deal with a growing concern that online gaming was affecting the physical and mental health of children.

Chinese state media reported that about 63 percent of Chinese minors play online games often. And about 13 percent of underage mobile game users are believed to play them for more than two hours a day on weekdays.

Chinese technology company Tencent Holdings took the first step to restrict online gaming for young people in 2017. It limited playing time for some young users of its popular game Honor of Kings. The move came after concerns from parents and teachers that children were becoming addicted to the game.

The first government restrictions followed in 2019. Those rules limited minors to one hour and a half of gaming time a day and three hours on weekends. The policy also limited the amount of money minors could spend on virtual items in gaming each month. The limit ranged from $28 to $57, depending on the age of the gamer.

Current rules require minors to use their real names and national identification numbers when signing in to play. Gaming companies created systems to identify minors. But many young gamers found ways to avoid the requirement, such as signing in under the names of adult family members.

The NPPA said online gaming companies will now have to prove they have effective identification systems in place. The number and intensity of inspections will also be increased to make sure they follow the new limits. The agency said it will also increase measures to punish gaming companies that violate the rules.

One gamer questioned whether officials understood the importance of gaming for young Chinese. "This group of grandfathers and uncles who make these rules and regulations, have you ever played games?” the user asked on the Chinese messaging service Weibo. “Do you understand that the best age for e-sports players is in their teens?"

Another gamer noted that the sexual consent age in China is 14, and that young people can start working at age 16. “But you have to be 18 to play games. This is really a joke.”

The social media comments were reported by Reuters. Some parents, however, told the news agency they support the new limits.

Hotel manager Li Tong said he thinks the new policy will be a good thing for his 14-year-old daughter.

"My daughter is glued to her phone after dinner every day for one to two hours and it's difficult for me or her mother to stop her," Li said. "We told her it's bad for her eyes and it's a waste of her time, but she won't listen," he added.

The Associated Press and Reuters reported on this story. Bryan Lynn adapted the reports for VOA Learning English. Mario Ritter, Jr. was the editor.

regulate – v. to control an activity or process, especially by using rules

addicted – adj. not able to stop doing something

virtual – adj. used to describe something that can be done or seen using computers or the internet instead of happening in a physical place

consent – n. permission for someone to do something

glued – adj. to be continuously fixed on doing something