An American college football player makes the winning touchdown in a game watched by millions of people on television.

Suddenly, many people around the United States know his name.

But, unless he becomes a professional athlete in the National Football League, he cannot make any money from being famous.

It was that way for around 100 years, but it changed last week.

On July 1, about 460,000 college and university athletes in all sports were permitted to make money from their fame.

The organization that runs college sports in the U.S. is the National Collegiate Athletic Association, or NCAA.

For years, the NCAA punished athletes who took money from supporters. In fact, some athletes chose not to attend college, or to leave school after a year or two, because they could not earn money from their athletic ability and fame.

The NCAA decided it would no longer punish athletes who wanted to make money from their fame on June 30. The decision came one day before 12 states were set to permit college athletes to make money by appearing in advertisements for products, or saying they liked items in social media posts. The states included Alabama, Florida and Texas. They all have well-known college sports teams, especially in the nation’s most wealthy sport – American football.

For many years, when people said college athletes should be able to earn money, the NCAA argued that they already had a good deal: they were given tuition money in return for the many hours each week spent practicing their sport. At some private universities, four years of tuition can cost well over $100,000.

Then, television began paying millions of dollars to show the games. Coaches became famous and wealthy. The players started to think they were no longer getting a good deal. 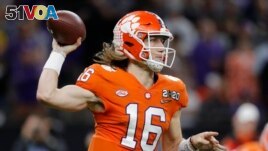 Clemson quarterback Trevor Lawrence was one of the most well-known players, but he could not make money until going to the NFL. (AP Photo/Gerald Herbert)

One former college basketball player, Ed O’Bannon, brought a legal case against the NCAA and a video game company.

O’Bannon went to the University of California in Los Angeles, known as UCLA, in the 1990s. He argued he should be paid after finding that a character that looked like him was being used in a video game. Eventually, a court in California said the NCAA was breaking national labor rules.

All of those events led to the NCAA’s decision. However, experts say the NCAA will likely limit the products and services young athletes can support.

Each state will be able to make its own rules. For example, in Texas, students cannot make money by supporting companies that sell alcohol, tobacco or offer people the chance to risk their money by gambling on sports.

In addition, the NCAA plans to make sure universities do not pay athletes directly or give them money in exchange for choosing their school.

Michael Rueda is a lawyer and an expert in sports and entertainment. He said the new rules will cause “a bit of chaos.”

Some businesses are already trying to work with college athletes.

A business called Gopuff operates in 650 cities. It delivers food and other items. Gopuff is offering athletes a chance to make money by making supportive statements on social media.

Rick Karcher is a professor in sports management at Eastern Michigan University. He said it is too early to predict how much money the athletes will make. He warned, however, that the money is “limited” and that athletes will be competing against each other.

Graham Mertz is a well-known football player at the University of Wisconsin. He has created a text image, known as a logo, for himself that he can use on social media.

DePaul University in Chicago said it created a business program to teach athletes about ways to make money from their name.

Athletes, however, will need to be careful about supporting products and companies that compete with those that give money to their universities. For example, it is unlikely that an athlete will be allowed to support Coke if their school gets a lot of money from Pepsi.

For now, it looks as if the chaos Rueda talked about will only last for a short time. Experts think the rules will become stronger over time.

In addition, Karcher said it is unclear if the ability to make money will be worth it for some students. If an athlete can only earn about $500 per year, he wondered, “is it worth all the time and thought and effort trying to get it?”

Dan Friedell adapted this story for Learning English based on reports from the Associated Press. Susan Shand was the editor.

Can you think of some products that would be good for college athletes to support? Tell us in the Comments Section and visit 51VOA.COM.

touchdown – n. a score that is made by carrying the ball over the opponent's goal line or by catching the ball while standing in the end zone

athlete – n. a person who is trained in or good at sports, games, or exercises that require physical skill and strength

tuition – n. money that is paid to a school for the right to study there

coach – n. a person who teaches and trains the members of a sports team and makes decisions about how the team plays during games

character - n. a person who appears in a story, book, play, movie, or television show

gamble – v. to play a game in which you can win or lose money or possessions : to bet money or other valuable things

chaos – n. complete confusion and disorder : a state in which behavior and events are not controlled by anything