Cuba largely kept coronavirus infections low last year. But now, the Caribbean nation has the highest infection rate per person in Latin America. That is threatening the country’s health care system and has led to protests of the communist government.

The country of 11 million people reported nearly 4,000 cases per million people over the last week. That is nine times higher than the world average and more than any other country in the Americas for its size.

The sharp rise in cases is being fueled by the highly infectious Delta variant. Hospitals in the area of Matanzas are very crowded and are close to failing. State media reports have shown images of patients in beds. They also have reported that doctors say there is a lack of oxygen and other supplies.

Cuba’s handling of the pandemic was one issue that drove thousands to the streets last Sunday in anti-government protests. People also protested shortages of food and medicine.

Cuba is not alone in struggling with the pandemic. But the country’s strong healthcare system is a politically important part in keeping the country’s one-party system in power.

Daniel Rodriguez is a Cuban-American historian. He wrote a book on the country’s medical politics. The government, he said, has “made the case that one of the main accomplishments of the revolution is its world-class medical sector.”

When cases of the virus began to rise sharply, he said, “it appeared increasingly the revolutionary government was no longer able to protect Cuban lives, and the result was an extraordinary repudiation of the revolution itself.” 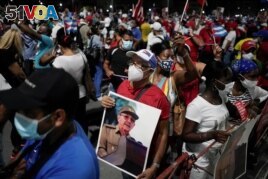 A man holds an image of Cuba's former President and First Secretary of the Communist Party Raul Castro during a rally amid concerns about the spread of the coronavirus disease (COVID-19) in Havana, Cuba, July 17, 2021. REUTERS/Alexandre Meneghini

The spread of the virus and the resulting restrictions are also hurting Cuba’s already struggling economy. There are fewer numbers of flights. Many Cubans work in the tourism industry and depend on travelers to bring in money and goods -- including medicine.

Rodriguez said food and medicine shortages because of the pandemic have been damaging to the government.

Cuba's government has blamed the demonstrations on U.S.-financed "counter-revolutionaries." The government is largely blaming Cuba’s struggling economy on American sanctions that were made stricter during the pandemic.

Several countries and non-government organizations called on the U.S. to lift sanctions this week.

On Saturday, officials organized pro-government protests across the island. Thousands of people attended.

But many Cubans have aimed their anger at their own government's handling of the economy and the pandemic.

"We are hungry, there's nothing at the moment, not even medicine," said Aylín Sardi&#241;a. She is 33 years old. She attended a protest in Havana.

Cuba has had some pandemic successes. The country has produced five possible vaccines. Two of them are more than 90 percent effective, based on Cuban data.

Many Cuban doctors went to help other countries deal with the pandemic. The country has one of the highest number of doctors per person in the world.

But with cases now rising fast, Cuba's economic crisis is worsening. Many officials do not want to require strict lockdowns. Many people already have to stand in lines for hours to get goods like food.

So far only about two million people - less than 20 percent of the population - are fully vaccinated.

The country aims to have 70 percent of the population fully vaccinated by September. But experts warned that in the next few weeks, COVID-19 deaths would likely continue to rise.

Libia Ortega is a restaurant worker in Matanzas city. The restaurant is closed because of the pandemic and food shortages.

"You go out onto the street to buy food," she said, "and someone says to you: do you know who else died?"

handle — v. to deal with (a person, situation, etc.) successfully

transmissible — adj. able to be spread to other people, animals, etc. : capable of being transmitted

revolution – n. the usually violent attempt by many people to end the rule of one government and start a new one

repudiate — v. to refuse to accept or support (something) : to reject (something or someone)

tourism — v. the activity of traveling to a place for pleasure

sanction — n. an action that is taken or an order that is given to force a country to obey international laws by limiting or stopping trade with that country, by not allowing economic aid for that country, etc.

lockdown — n. a state of isolation or restricted access put in place as a security measure