And now Words and Their Stories from VOA Learning English.

Springtime is coming soon to the northern half of the planet. That means signs of green plant life are beginning to show!

Some flowers and trees will start to bloom and some grasses will become more green. 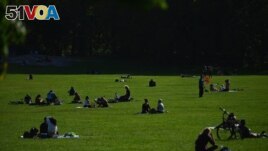 People sit in the grass at Central Park on October 15, 2020 in New York City. (Photo by Angela Weiss / AFP)

In the United States, many people spend a lot of time and money growing a yard full of weed-free green grass. Even if that area surrounding the house is not used very much, some people still want it to look nice with lots of healthy-looking green grass.

Neighbors can even get competitive over who has the greenest, thickest lawn.

But competing with and comparing ourselves to others is usually not a good idea. In fact, we have an idiom to describe that exact situation.

That idiom is: “The grass is always greener on the other side of the fence.”

This expression describes people who are not happy with their own lives, and they think that someone else – or everyone else – has a better life than they do.

Some might say this idiom describes the human quality of always wanting something different than what you have. Some people are never happy with their own situation. They are never satisfied. They think others have it better or easier than they do. Even if their life is perfectly fine, they still look at others and want what they have.

The idiom also expresses this idea: people often think a different set of conditions would bring them greater happiness. So, we use this idiom to remind people that this is not often the case.

Let’s listen to a conversation between two friends. Notice how they use a shortened form of the idiom. This is often how you will hear it.

A: Did you hear the news about Martin? He’s moving again.

B: What? That’s the third time in a year! What’s wrong this time?

A: Well, he visited a friend in Oregon and saw that the guy has got a big house with a big yard, and the city has more farmers’ markets and bike lanes than where he lives now. So now he’s moving out there to start over.

B: He did the same thing a few months ago when he visited a friend in California.

A: You know Martin. He’s always been a grass-is-always-greener kind of guy.

B: Well, hopefully he’ll be happy in Oregon.

And that’s all the time we have for this Words and Their Stories. Until next time, I’m Anna Matteo.

yard – n. an outdoor area next to a building that is often bordered (as by shrubs or fences)

weed – n. a plant that tends to grow where not wanted and to prevent the growth of more desirable plants usually by taking up space

lawn – n. ground (as around a house or in a garden or park) that is covered with grass and is kept mowed

idiom – n. an expression that cannot be understood from the meanings of its separate words but must be learned as a whole

fence – n. a barrier (as of wood or wire) to prevent escape or entry or to mark a boundary

satisfied – adj. pleased or content with what has been experienced or received

bike lane – n. a division of a road marked off with painted lines, for use by cyclists