Scientists say they have found a 43 million-year-old fossil of a whale ancestor in Egypt. The fossil remains help show how ancestors of modern whales might have moved from living on land to living in water.

An Egyptian-led team of researchers made the discovery.

The newly found whale belongs to the Protocetidae group. That is a group of ancient whale ancestors that might have lived on land and in the water.

The fossil was found in the Fayum Depression in Egypt's Western Desert. The area was once covered by a sea. Scientists have made many discoveries there that have provided more information about the evolution of whales.

The new species is named Phiomicetus Anubis. It is estimated to have been three meters long and weighed about 600 kilograms. It fed on other animals, the researchers said. It is the oldest whale ancestor known in Africa. 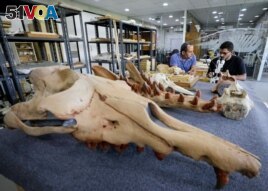 "Phiomicetus anubis is a key new whale species, and a critical discovery for Egyptian and African paleontology," said Abdullah Gohar of the Mansoura University Vertebrate Palaeontology Centre (MUVP). He is the lead writer of a paper on the fossil.

The whale evolution in Africa is still largely unknown, the researchers said. But work in the area can provide new information about the evolutionary change from amphibious to fully aquatic whales.

Rocks in the Fayum Depression cover a 12 million year period. Researchers have found “semiaquatic crocodile-like whales to giant fully aquatic whales," said Mohamed Sameh. He is with the Egyptian Environmental Affairs Agency and also a writer of the study. The research also raises questions about ancient environments.

Part of the whale's name honors the Fayum Depression. The species name comes from Anubis, the ancient Egyptian god connected with the afterlife.

fossil — n. the remains of an ancient living thing that have turned to mineral

amphibious — adj. able to live on both land and in the water

evolution — n. a theory that the differences between modern plants and animals are because of changes that happened by a natural process over a very long time

key — adj. something that provides an explanation or solution

aquatic — adj. living in or found near the water