After a 30-minute walk and a short boat ride to his school in a distant part of southern Chile, Diego Guerrero can finally get on the internet.

His school is in the small village of Sotomo, around 1,000 kilometers south of capital Santiago. Just 20 families live there. The town can only be reached by boat.

Now, it is one of two places in Chile chosen for a new project to receive free internet for a year. The project is run by billionaire Elon Musk, chief executive of SpaceX. 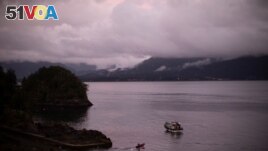 The waterways seen around the village of Sotomo, Chile, August 6, 2021. The village can only be reached by boat. (REUTERS/Pablo Sanhueza)

Starlink, a part of SpaceX, aims to send out 12,000 satellites as part of a network to provide internet services around the world,

The plan is important for getting the money that SpaceX needs to pay for Musk’s dream of developing a new rocket that can fly paying people to the moon and to try to colonize Mars.

For Diego, 7, getting online is enough of a dream.

“I really like the internet because we can do homework,” he said. “It’s faster so we can do more of it.”

Diego’s father, Carlos, has bigger plans for his son. He hopes the new internet connection will provide his son with more opportunities.

He takes Diego to school daily by boat, often battling the weather. He said, “I didn’t have the option of going to school so you do it whatever the conditions, good or bad weather or pandemic, even if it’s difficult.”

The school’s seven students can go online by using personal devices provided by the education ministry to help their education.

Their only teacher at the school, Javier de la Barra, said he looked forward to using the internet for professional development.

The signal is received by a satellite dish on top of the school. Another device gives out a wireless signal to most of the school and outside areas. The plan is to extend it to the rest of the village.

It only works from noon to midnight because of the limited supply of fuel to the generator that supplies power to the village.

De la Barra said it is still a large improvement to the phone internet connection that a few people in the area use.

The Starlink antennae was placed in July. Transport and Telecommunications Minister Gloria Hutt attended the ceremony for its start.

She said she hoped Starlink would help those who have lived without the internet. The difficulty of living now without an internet connection became clear when the coronavirus lockdowns left people without good internet struggling to work or study.

Chile has among the highest rates of internet connectivity in South America. Government numbers show that there are 21 million mobile internet connections among its population of 19 million as of March 2021.

As Diego and Carlos know, having mobile internet does not mean you can always get a signal.

Carlos Guerrero said, “What would be great is if all these services could be extended around our community, not just to a small part, so everyone could enjoy them.”

Pablo Sanhueza reported this story for Reuters. Gregory Stachel adapted it for VOA Learning English. Susan Shand was the editor.

network – n. a system of computers and other devices (such as printers) that are connected to each other

opportunity – n. a set of circumstances that makes it possible to do something

pandemic – n. an occurrence in which a disease spreads very quickly and affects a large number of people over a wide area or throughout the world

dish – n. something that is shaped like a shallow bowl

mobile – adj. able to be moved from one place to another