European Union scientists have reported the continent’s warmest summer on record this year.

Measurements by the EU’s Copernicus satellite system showed the average surface temperatures from June to August were about 1 degree Celsius higher than the 1991-2020 average.

Temperatures across Europe were also 0.1 degree Celsius warmer than the past warmest summers on record, in 2010 and 2018. 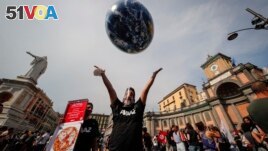 In this Thursday, July 22, 2021 file photo, people demonstrate on the sidelines of a G20 environment meeting, in Naples, Italy. (AP Photo/Salvatore Laporta, File)

The 2021 summer temperature record marks the latest development in a long-term worldwide warming trend. Scientists have linked climate change on the planet to pollution emissions related to human activities.

The Copernicus observation program has been keeping temperature records since 1950. But its records are compared with other data going back to the mid-19th century.

The organization said that around the world, August 2021 tied for the third-warmest month on record. Temperatures in August were just over 0.3 degrees Celsius warmer than the 1991 to 2020 average, it reported.

In Europe, the data showed that August 2021 was near the 1991 to 2020 average. There were record-breaking high temperatures in Mediterranean countries, warmer-than-average weather in the east and generally below-average temperatures in the north.

Earlier on Tuesday, a group of environmental groups called for a postponement of a major United Nations Climate Change Conference because of the continuing COVID-19 crisis.

The COP26 conference, which was already delayed for a year, is set to open in early November in Glasgow, Scotland.

But the Climate Action Network, CAN, said it is concerned that many delegates from around the world may not be able to attend because of travel restrictions. In addition, many countries are struggling to control COVID-19 case numbers. Some countries are having difficulties getting vaccines, the group said.

“Our concern is that those countries most deeply affected by the climate crisis and those countries suffering from the lack of support by rich nations in providing vaccines will be left out of the talks…” the CAN’s director, Tasneem Essop said in a statement.

The British government, which is holding the event, rejected calls for a postponement. It said the latest Copernicus report results demonstrate the urgency for leaders to deal with climate change issues.

COP26 President-Designate Alok Sharma noted that while the conference had been delayed a year because of the pandemic, “climate change has not taken time off.’’

Sharma added that conference organizers were working “tirelessly” with its partners and the Scottish government “to ensure an inclusive, accessible and safe” meeting in Glasgow.”

Reuters and The Associated Press reported this story. Bryan Lynn adapted the reports for VOA Learning English. Ashley Thompson was the editor.

trend – n. the general direction in which something appears to be moving

emission – n. the act of producing or sending out something (such as energy or gas) from a source

outbreak – n. a sudden start or increase in disease

ensure – v. make sure something happens