VOA Special English
How Technology Is Changing Investigative Reporting
Update Required To play the media you will need to either update your browser to a recent version or update your Flash plugin.
By Bryan Lynn
2022/5/11

One kind of news gathering is known as “open-source” reporting. This is when reporters use publicly available materials to help them tell stories. These can include satellite images, video from mobile phones or security cameras and social media information.

The field of open-source reporting is still very young. But some major news organizations have already created separate news teams to center on technology-based reporting methods. 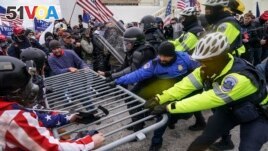 Rioters try to break through a police barrier at the Capitol in Washington on Jan. 6, 2021. (AP Photo/John Minchillo, File)

The New York Times newspaper has established an investigative reporting department that specializes in open-source reporting. The Washington Post recently announced it was adding six people to a special video forensics team.

The New York Times published a story based on such reporting in March. The piece was based on radio communications between Russian soldiers during the first 24 hours of a Russian invasion of the town of Makariv, outside Kyiv, Ukraine.

The newspaper said it collected hundreds of recordings from Russian military forces that communicated in the field by radio. It said the communications were publicly available because they were not encrypted, or protected by technology.

The Times said the recordings were captured and provided by amateur radio operators and open-source groups that gather communications from across the world.

Some recordings suggested disorganization in military activities. Russian soldiers were heard describing a lack of supplies and non-working equipment. In one recording, the Times team noted that someone appearing to support Ukraine broke into the communications and advised Russian troops to “go home.”

The Times reporters said they did not only use information contained in the recordings for their story. They also attempted to confirm details – such as dates, times and places – heard in the communications. They did this by collecting publicly available videos, social media messages and eyewitness descriptions.

Another project the Times team took on was a report called “Day of Rage.” It sought to piece together events during the January 6, 2021, riot at the U.S. Capitol. The report included video captured by protesters themselves, as well as material from law enforcement and reporters. It described in detail how the attack began, who the protest leaders were and how people were killed.

A Times video investigation also provided information about an American drone attack that killed 10 civilians in Afghanistan last year. U.S. military officials thought they had targeted a vehicle used by terrorists planning to attack Kabul’s airport in the final days of a U.S. pullout from the country.

But evidence presented in the Times investigation showed that the drone attack killed a food aid worker who had been transporting water in areas near the airport. Two other adults and seven children also died in the strike. U.S. military officials later admitted that the drone had hit the wrong target.

The availability of satellite images from private companies has also led news organizations to use them in open-source reporting. In one example, the Times used satellite images to quickly disprove Russian claims that atrocities carried out in Ukraine had been staged.

Other technology, including artificial intelligence (AI), is helping reporters seeking to learn how something happened. In 2018, the Times worked with a British company to digitally rebuild a structure in Syria that helped disprove official denials about the use of chemical weapons.

In a similar way, The Associated Press created a 3D model of a theater in the Ukrainian city of Mariupol that was bombed by Russian forces. The model, combined with video and interviews with survivors, led to an investigative report that suggested more people died there than first thought.

The AP has cooperated with other organizations on several open-source investigations and is looking to further expand its own efforts. These included a look into terror methods used by Myanmar's military government, an examination of the effects of war on a Gaza neighborhood and possible war crimes in Ukraine.

amateur – adj. taking part in an activity for pleasure, not as a job

atrocity – n. a very cruel or terrible act or action

stage – v. to produce or cause to happen for public view or public effect

artificial intelligence (AI) – n. the development of computer systems with the ability to perform work that normally requires human intelligence