VOA Special English
Important Chemicals for Life May Have Arrived from Space
Update Required To play the media you will need to either update your browser to a recent version or update your Flash plugin.
By John Russell
2022/5/4


A study of meteorites has found more evidence that space rocks may have brought chemicals to Earth that helped start life on the planet.

The meteorites studied had landed in Australia, Canada and the United States.

Earlier research on the objects showed they contained three of the five chemical components necessary to form DNA and RNA. DNA is the molecule that carries genetic instructions in living things. RNA is the molecule important to the operation of genes. 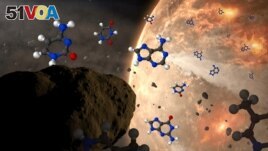 Conceptual image of meteoroids delivering nucleobases to ancient Earth. The nucleobases are represented by structural diagrams with hydrogen atoms as white spheres, carbon as black, nitrogen as blue and oxygen as red. (NASA Goddard/CI Lab/Dan Gallagher/Handout via REUTERS)

That information comes from Yasuhiro Oba of Hokkaido University's Institute of Low Temperature Science in Japan. Oba was the lead writer of the study that was published in Nature Communications.

The research findings support the idea that meteorites could have been an important source of organic compounds necessary for the emergence of Earth's first organisms, said study co-writer Danny Glavin of NASA's Goddard Space Flight Center in Maryland.

Scientists have been seeking to better understand how chemical compounds came together to form a living thing able to reproduce itself. The formation of DNA and RNA would be an important event as these molecules contain the instructions to build and operate organisms.

"There is still much to learn about the chemical steps that led to the origin of life on Earth," Glavin said. He added, "This research certainly adds to the list of chemical compounds that would have been present” on Earth before the emergence of life.

"All three meteorites contain a very complex mixture of organic molecules, most of which have not yet been identified," Glavin said.

Earth formed about 4.5 billion years ago. In its early days, it was hit by meteorites, comets and other material from space. The planet's first organisms were simple microbes in the seas. The earliest-known fossils are of marine microbial life dating to around 3.5 billion years ago.

The two chemical components discovered in the latest study are called cytosine and thymine.

The five would not have been the only chemical compounds necessary for life. Among other things needed were sugars, fatty acids, and amino acids, which are components of proteins and enzymes.

Oba said, "The present results may not directly” explain the beginning “of life on the Earth." But, it does help to understand what organic molecules were on the early Earth before life formed, he said.

Will Dunham reported on this story for Reuters. John Russell adapted it for VOA Learning English.

meteorite – n. a piece of rock or metal that has fallen to the ground from outer space

component –n. one of the parts of something (such as a system or mixture) : an important piece of something

organic – adj. of, relating to, or obtained from living things

emerge – v. to rise or appear from a hidden or unknown place or condition : to come out into view

microbe – n. an extremely small living thing that can only be seen with a microscope

fossil –n. something (such as a leaf, skeleton, or footprint) that is from a plant or animal which lived in ancient times and that you can see in some rocks