And now, Words and Their Stories, from VOA Learning English.

At the start of a new year, many people make a resolution – something to improve on or work on in the new year.

Some common resolutions are to lose weight or make more money. Another common resolution for many people is to clean their homes from top to bottom. This usually involves not only cleaning, but organizing as well. 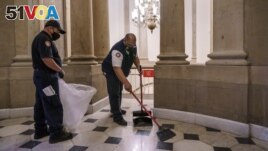 Workmen clean up outside the office of Speaker of the House Nancy Pelosi the day after violent protesters loyal to President Donald Trump stormed the U.S. Congress, at the Capitol in Washington, Jan. 7, 2021. (AP Photo/J. Scott Applewhite)

The start of a new year is a great time to remove the things you no longer need from your home.

So, today we talk about the expression: to clean house.

If you clean house you make a place neat and orderly by removing extra stuff. You get rid of dirt and anything not needed or wanted. You straighten up, tidy up, and declutter.

That is how we “clean house” in a physical environment. But we also use this term another way. When we get rid of bad things we don’t want, like bad behavior, we can use the term “clean house.”

Now, we heard a term earlier in this program that we can also use in this way: To straighten up.

However, we usually use “straighten up” when talking about an individual. If you tell someone to straighten up, you are telling them to stop some sort of bad behavior. You can also tell them to clean up their act. This also means they have been doing something bad and you warn them to change it.

So, let’s say a friend of yours is slacking off at work -- coming in late, leaving early, and not really doing anything. You could tell him to straighten up or clean up his act or he will get fired!

If students do poorly at school, parents could tell their children to “straighten up” or “clean up” their act.

How’s your friend Meredith doing? I haven’t seen her around for a long time.

She’s been better. She had been slacking off at work for months. Her boss warned her to straighten up and clean up her act. But she didn’t. So, he fired her.

You know. It’s funny you mention this. A friend of mine got fired recently, too. His company needed to clean house on jobs that cost money, but didn’t do much. And he got the axe.

Oh, what was his job?

He was Chief Efficiency Officer. And after an audit, he found that he was getting paid too much to do his job. So, he had to fire himself.

Do you have a new year’s resolution? And is it to clean house?

And that’s the end of this week’s Words and Their Stories. Until next time … I’m Anna Matteo.

scandal – n. a cause of shame

slacking off – phrasal verb as in forgetting, neglecting

fired – v. to let go from office, service, or employment

got the axe – slang phrase to get fired from a job

audit – n. a close look at or over someone or something in order to judge condition