Italy has announced a ban on large cruise ships sailing into the northern city of Venice.

Culture Minister Dario Franceschini said the ban was approved during a Cabinet meeting on July 13 and will take effect August 1. It covers the lagoon near the city’s St. Mark’s Square and the Giudecca Canal. The lagoon area is used by cruise ships stopping in Venice. Venice is built on a system of canals.

Franceschini said the government decided to act fast to avoid the U.N. culture agency UNESCO adding Venice to its list of World Heritage in Danger sites at an upcoming meeting in China.

UNESCO suggested last month it could put Venice on the list. The agency says the cruise ships -- which carry and unload thousands of day-trippers -- threaten the surrounding water environment. 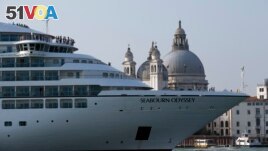 In this Sept. 27, 2014 file photo a cruise ship transits in the Giudecca canal in front of St. Mark's Square, in Venice, Italy. (AP Photo/Andrew Medichini)

Environmentalists and cultural heritage activists have long sought to establish a ban on cruise ships in Venice. But the plans were opposed by local business leaders, who argue that the ships should be permitted because they bring in so much money.

The Italian government had decided on a ban earlier this year but did not immediately set a start date.

The ban covers ships weighing more than 25,000 tons or longer than 180 meters. It also bars smaller ships that produce too much pollution or could otherwise harm the city’s environment.

Italian Prime Minister Mario Draghi’s office said other ships that are “considered sustainable” to the Venetian environment can continue to stop in Venice. The office noted that permitted ships generally carry about 200 passengers compared to the thousands transported by large cruise ships.

When cruise passengers are dropped in Venice, they generally only have a few hours to spend in the city. Most passengers end up visiting popular sites like St. Mark’s Square, adding to the city’s already crowded public spaces.

No cars are permitted in historic Venice, which is made up of narrow passages and numerous bridges. During the city’s high tourist season, getting around Venice on foot can be difficult.

The government order also establishes compensation plans for industry businesses and others affected by the ban.

Officials plan to seek other possible stopping points for cruise ships in waters outside the heart of Venice. For now, the government has approved at least four temporary sites near the industrial port of Marghera, on the northwestern Adriatic Sea.

The Associated Press reported this story. Bryan Lynn adapted the report for VOA Learning English. Susan Shand was the editor.

cruise ship – n. a large ship that is similar to a hotel, on which people travel for pleasure

canal – n. an artificial river built for boats to travel through

heritage – n. buildings, paintings, customs, etc. that are important in a culture or society because they have existed for a long time

disturb – v. to worry or cause to be upset

sustainable – adj. involving methods that do not completely use up or destroy natural resources

compensation – n. money that is paid to someone to make up for losses or damages