Thousands of athletes, officials, event workers and media are arriving in Japan for the Games. At the same time, there is a local state of emergency and widespread opposition from the public.

Events start Wednesday — in softball and women's soccer — two days before the opening ceremony on July 23.

Suga said he wants the world to know "we can bring success to the delivery of the Games."

"We will protect the health and security of the Japanese public," he added. The prime minister's office said Monday that more than 21 percent of Japan's 126 million people have received the COVID-19 vaccine.

Olympic officials on Sunday reported the first coronavirus case among sports competitors in the village in Tokyo where 11,000 of them will stay. There have been 67 cases among those who planned to compete in the Games since July 1, organizers said on Tuesday. 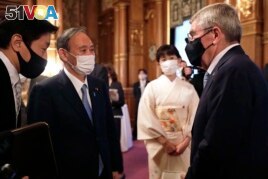 Kenji Shibuya is the former director of the Institute for Population Health at King's College London. He said such statements only confuse and anger people because conditions were "totally opposite."

"It's obvious that the bubble system is kind of broken," said Shibuya. In April, he had written in the British Medical Journal that the Olympics must be "reconsidered" because of Japan's inability to contain coronavirus cases.

"My biggest concern is, of course, there will be a cluster of infections in the village or some of the accommodation and interaction with local people." Not enough testing at the bubble's border and the impossibility of controlling people's movements mean that the Games could spread the Delta variant of the virus, he said.

Shibuya noted that he is concerned after hearing about cases that were not noticed at the airport. And he watched videos showing meetings between athletes, workers and reporters. He fears that transmission will take place through the air within the village and sports centers. However, there will be no local or foreign fans at events.

New COVID-19 cases in Tokyo reached 1,410 on Saturday, a near six-month high. Public health experts have warned that summer weather, travel and the spread of the Delta variant could lead to an increase in Tokyo’s daily cases by next month. Those levels could put too much pressure on the city's medical system.

Vaccination rates have increased quickly since last month. But they recently slowed because of supply and delivery problems. Health experts in Japan have questioned accepting so many international visitors for the Games, which end on August 8.

delivery –n. the act of taking something to a person or place

confuse – v. to make (someone) uncertain or unable to understand something

bubble – n. a group of people who agree to follow by a shared set of rules to try to keep everyone safe from COVID-19.

accommodation(s) –n. places where travelers can sleep and find services

transmission – n. the act or process by which something (in this case, a virus) is spread or passed from one person or thing to another

What do you think of the Tokyo Olympics continuing during the pandemic? We want to hear from you. Write to us in the Comments Section.