VOA Special English
Kenyan Makes Cooking Fuel from Plant Waste
Update Required To play the media you will need to either update your browser to a recent version or update your Flash plugin.
By Jill Robbins
2021/7/31


A project in Kenya is using biogas technology to attack two major pollution problems with one device: a machine that changes waste such as invasive water hyacinth into cleaner cooking fuel.

Biogas International, a Kenyan energy technology company, is partnering with drug maker AstraZeneca and the Institute for Sustainability Leadership at the University of Cambridge. 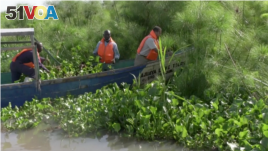 The project has so far provided 50 of the “Flexi Biogas” devices to homes in the city of Kisumu in western Kenya. The device is called a “digester” because it breaks down plant waste to produce gas. The digesters will permit families to stop using wood or charcoal, both of which produce dangerous smoke. People will also be able to cook foods faster using the gas.

Tony Otieno used the gas from a digester to cook tea for his 70-year-old grandmother Margaret. He said,

"The gas has no smoke, does not smell, and it is much faster than the jiko."

Some of the families received a gas stove as part of the project, to replace their jiko - a stove that uses charcoal. Many of the digesters were also given out for free. The company paid the cost.

The machines process plant waste such as ground-up water hyacinth. That plant has covered large parts of Lake Victoria, a freshwater lake between Kenya, Uganda and Tanzania.

The Flexi Biogas devices use 2-3 kilograms of water hyacinth scraped from the lake to produce gas. After the plant waste produces gas, it can be put on other plants as food. The owner of the device can sell extra gas or plant waste.

The fuel powers a stove that can make a meal of corn and beans in around four hours.

Dominic Wanjihia Kahumbu is head of Biogas International. He said,

"Water hyacinth is a blessing in disguise."

He added that the elderly people are being harmed by their cooking fuel. Instead, he believes they should all have the cleaner biogas.

But at a cost of $650, most families in the city do not have enough money to buy the device, he said. The World Bank put the Gross Domestic Product per person in Kenya at just over $1,800 in 2020.

Although the technology can be on a small or large scale, he said, each system cost a lot to make. As a result, it is unlikely the company will make a profit for at least another five years. He said the company needs new investment.

Two larger versions of the equipment are still in the testing phase. They would produce clean fuel on an larger scale for restaurants, chicken farms and fish drying facilities in the area. An example of a large system is in place at the Ngong Market and is shown on the company’s Facebook page.

This story was reported by Fred Ouko and Nazanine Moshiri. Jill Robbins adapted it for Learning English. Susan Shand was the editor.

biogas – n. a kind of fuel gas, especially methane, produced by the fermentation of organic matter

mosquito – n. a small flying insect that bites the skin of people and animals and sucks their blood

blessing – n. something that helps you or brings happiness

in disguise – expression. made to look like something else or presented as another thing

Gross Domestic Product – n. the total monetary or market value of all the finished goods and services produced within a country's borders in a specific time period.

What do you think of this effort to use weeds? How do people in your country use unwanted plants? We want to hear from you. Write to us in the Comments Section.