Kickstarter is a website where people give money to support creative projects. It started in two thousand nine, mostly to help artists and musicians. Now, inventors, people starting businesses and a growing number of farmers are raising money on this site for crowd-sourced funding.

Josh Brill and Meadow Squire grow vegetables and rice in Tinmouth, a town in the northeastern state of Vermont. Last year they used Kickstarter to raise more than six thousand dollars to increase their rice production.

Seventy-six people watched the couple's six-minute video and believed enough in their dream to send them money. 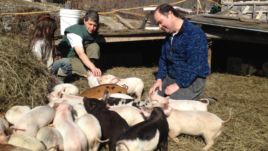 Kickstarter users Walter and Holly Jeffries with some of the 300 pigs they're raising in West Topsham, Vermont
Another farmer in Vermont, Scott Nelson, raised almost nine thousand dollars. He wanted to document the growth and development of his farm to teach others who are interested in organic farming, as a video explained.

VIDEO: "At the end of the season, we will compile it all into a film documentary."

Bigger ideas have raised much more for some farmers among the projects on Kickstarter. In all, on a recent day, there were forty-five hundred creative projects seeking money on the site. Site officials reported three million dollars in weekly pledges.

To raise money on Kickstarter, people need to think of a project with a clear goal. Then they need to get the project approved by the site. Many project creators make a video to explain what their project is and why people should support it.

To get people to pledge money, projects also include a list of thank-you gifts for different levels of support. Josh Brill and Meadow Squire gave supporters rice, seeds and, for fun, "good karma" points. They say they are happy with their experience using the site to raise money for their new rice paddies.

JOSH BRILL: "One of the key things that Kickstarter allowed us to do was reach out -- having the video online and being able to link with Facebook."

MEADOW SQUIRE: "It really was free advertising for us -- you know, so many people now know we're growing rice and they know more about our farming practices because we do a lot of alternative agricultural practices. And there's already so much anticipation about the rice coming that we would not have had if we just had gotten a loan from a bank."

Josh Brill says one promise of money came all the way from New Zealand.

JOSH BRILL: "When someone is willing to put up their money for your farm, that means something. It's like you would feel bad if you couldn't succeed for them."

And that's the VOA Special English Agriculture Report. You can read, listen and learn English with our stories at 51voa.com. I'm Christopher Cruise.