Members of Chile’s constitutional delegation have chosen a woman from the indigenous Mapuche people to lead efforts to create the new constitution. The choice marks a big turning point for a people that were ignored during the making of the country’s present constitution.

The Mapuche are the largest group of indigenous people in Chile.

Elisa Loncon is a political independent, a university professor and an activist for Mapuche educational and language rights. She was chosen by 96 of the 155 men and women -- including 17 indigenous people -- that make up the new constitutional body. The group will replace Chile's current constitution, which was approved under the dictatorship of Augusto Pinochet. 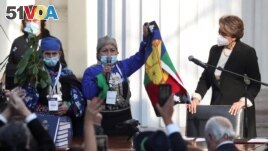 Loncon was celebrated by members of the group after accepting the position on Sunday. She said, "I salute the people of Chile from the north to Patagonia, from the sea to the mountains, to the islands, all those who are watching us today.”

Loncon added that she was thankful for the support of “coalitions that placed their trust and their dreams in the hands of the Mapuche nation." They voted for “a Mapuche person, a woman, to change the history of this country,” she said.

Electing Loncon represented a high point in a day that included a suspension of the delegates' swearing in ceremony. The delay happened after protests took place outside and inside Santiago’s former congress building, where the event was being held.

During Loncon’s election, demonstrators from all political sides demanded that police not be involved in the ceremony. The protesters were met by heavily armed police at blockades.

As demands came from delegates for the special forces police to leave, the head electoral court official agreed to suspend the event until midday.

The incident demonstrated the intense issues for creating a new constitution as the country faces deep divisions. In 2019, there were massive protests over inequality that worsened after police responded with violence.

The constitutional body was chosen by a popular vote in May and is made up mainly of independent and leftist candidates. Some candidates had roots in the protest movement. A smaller share of more conservative candidates received backing from the current center-right government.

The delegates have promised to work on issues including water and property rights, central bank independence and labor policies. This has led to worry among business investors about possible big changes to the free market system for the world's top copper producer.

Before the ceremony began, Aymara and Mapuche delegates held spiritual ceremonies in the streets that included song and dance. Not recognized in the current constitution, these indigenous communities are hoping the new document will include cultural, political and social rights.

The delegation has up to a year to agree to a common rulebook, establish committees and write a new document.

The Reuters news agency reported this story. Alice Bryant adapted it for Learning English. Bryan Lynn was the editor.

indigenous – adj. of the earliest known inhabitants of a place, especially a place that was colonized by a now-dominant group

salute – v. to publicly praise someone or something

swear in – v. to have a ceremony in which a new leader makes a promise to do their work properly and with honesty and loyalty

committee – n. a group of people who are chosen to do a particular job or to make decisions about something