VOA Special English
Melting Ice Threatens Emperor Penguin Environment
Update Required To play the media you will need to either update your browser to a recent version or update your Flash plugin.
By Jonathan Evans
2021/8/8

A new study suggests that 98 percent of Emperor penguin groups may be pushed close to extinction by the year 2100. And about 70 percent of their groups will be in danger by 2050. The research was published in the journal Global Change Biology.

The United States Fish and Wildlife Service recently announced a plan to list the Emperor penguins as threatened under the Endangered Species Act.

Stephanie Jenouvrier is a penguin ecologist at the Woods Hole Oceanographic Institution. She said that Emperor penguins need secure sea ice to reproduce, to feed and to molt. Molting is the replacement of their old feathers with new ones.

The new study looked at overall warming developments and the increasing likelihood of extreme weather changes because of global warming. The study noted that extremely low levels of sea ice in 2016 led to a large reproduction failure of an Emperor penguin group in Antarctica’s Halley Bay.

That year, seasonal sea ice broke up before young penguins had time to develop waterproof adult feathers. About 10,000 baby birds drowned, Jenouvrier said. The group did not recover afterward. 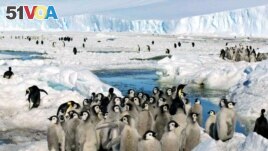 Crowds of Emperor penguins on the ice in Antarctica on December 21, 2005

Emperor penguins reproduce only in Antarctica during winter. Temperatures can reach minus 40 degrees Celsius, and wind speeds can reach 144 kilometers per hour. The penguins survive by gathering in groups of several thousand birds. But they cannot survive without enough sea ice.

Sarah Uhlemann is international program director at the nonprofit Center for Biological Diversity. She said, “These penguins are hard hit by the climate crisis, and the U.S. government is finally recognizing that threat.”

The U.S. government has listed other species outside the country as threatened, including the polar bear. Polar bears live in Arctic areas and are also threatened by climate change and sea ice loss.

Emperor penguins are the world’s largest penguins. There are currently between 625,000 and 650,000 of them worldwide.

Placing Emperor penguins on the threatened list provides protections, such as a ban against importing them for business purposes. Possible effects on the penguins must also be studied by U.S. sea fisheries currently operating in Antarctica.

Martha Williams is principal deputy director of the U.S. Fish and Wildlife Service. She said climate change affects many animal species around the world. She added, “The decisions made by policymakers today and during the next few decades will determine the fate of the Emperor penguin.”

Christina Larson reported on this story for the Associated Press. Jonathan Evans adapted this story for Learning English. Susan Shand was the editor.

extinction – n. the state or situation that results when something such as a plant or animal species has died out completely

fate – n. the things that will happen to a person or thing; the future that someone or something will have