VOA Special English
NASA Develops ‘Lunar Backpack’ to Support Future Moon Exploration
Update Required To play the media you will need to either update your browser to a recent version or update your Flash plugin.
By Bryan Lynn
2022/5/8


The American space agency NASA has developed a wearable device to guide future explorers on the moon.

The system is designed to map terrain and guide astronauts through unknown territory and dark areas of the moon.

The device can be worn as a backpack. It is called the Kinematic Navigation and Cartography Knapsack, or KNaCK. The system was specially designed to provide navigation assistance on the moon, which lacks the kinds of GPS systems that exist on Earth. 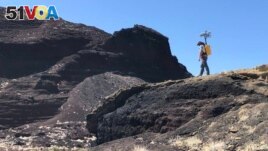 NASA engineers worked together with private partners to develop the system. One of the partners is Aeva Inc. of Mountain View, California. The company supplied LiDAR sensors and support for the project, NASA said.

The sensors it provided to NASA use a technology known as FMCW, Aeva said in a press release. NASA says the technology can provide “millions of measurement points per second” and create a high-quality map of an area’s terrain.

The company explained that the sun does not interfere with FMCW technology and it can operate in darkness. This can help astronauts and moon vehicles explore and map the lunar surface during the day or at night.

James Reuther is the vice president of technology at Aeva. He said the KNaCK system will be important “to help astronauts carry out critical objectives of NASA’s Artemis program.”

Artemis is NASA’s program to return humans to the moon. It aims to land American astronauts on the moon by 2025. It would mark the first time humans have visited the moon since NASA’s Apollo 17 landing in 1972.

Michael Zanetti leads the KNaCK project at NASA’s Marshall Space Flight Center in Huntsville, Alabama. He said the device is like a “superpowered version” of laser-based technologies used in surveying operations and driver-assistance tools for vehicles.

Zanetti noted that KNaCK can be used by astronauts for both navigation operations and science mapping. “It also will help ensure the safety of astronauts and rover vehicles in a GPS-denied environment such as the Moon,” he said.

Zanetti added that the system can provide real-time maps to show explorers “how far they’ve come and how far is left to go to reach their destination.”

NASA also worked with Alabama-based Torch Technologies Inc. to develop a working model KNaCK backpack. The device has been tested in several settings, including at a NASA research center in Kilbourne Hole, New Mexico. The center is used for lunar research because it is near a volcanic crater that contains terrain similar to the moon.

The space agency says the device can become an important part of future exploration activities on the moon. This could especially be true for astronaut visits to the moon’s South Pole. NASA wants to send explorers to this area. However, it receives little sunlight and would be difficult for astronauts to navigate.

The development team says it will next work to shrink the size of KNaCK. The current backpack model weighs about 18 kilograms. The goal is to produce a device that is about the size of a soda container for easy transportability.

Engineers are also working to find ways to protect the device’s sensitive electronics system from the effects of microgravity and radiation that exist in space.

Bryan Lynn wrote this story for VOA Learning English, based on reports from NASA and Aeva Inc.

backpack –n. a bag for carrying things that has two shoulder straps and is carried on the back

navigate – v. to find the right direction for traveling by using maps or other equipment

GPS (global positioning system) – n. a radio system that uses signals from satellites to tell you where you are and to give you directions to other places

objective – n. something that you are trying to achieve

survey – v. to examine an area of land by taking measurements and recording details

destination – n. the place where someone or something is going

crater – n. a big hole in the ground created by the force of an object