VOA Special English
NASA: New Data on Asteroid Bennu Still Suggests Possible Threat to Earth
Update Required To play the media you will need to either update your browser to a recent version or update your Flash plugin.
By Bryan Lynn
2021/8/15


The U.S. space agency NASA says new data from observations of the asteroid Bennu still suggests that the object could one day hit Earth.

But, the scientists studying the asteroid predict in a new study there is very little chance that Bennu will strike Earth in the coming centuries.

Bennu and other asteroids are considered near-Earth objects (NEOs). Scientists identify such objects as those having the possibility of coming within 50 million kilometers of Earth’s orbit.

Bennu was discovered in 1999. It is believed to have formed in the first 10 million years of our solar system’s history – more than 4.5 billion years ago. It moves into near-Earth space because of gravitational interactions with other planets. It also takes in heat from the sun that provides added push. Bennu makes its closest pass to Earth every six years.

The latest data on Bennu was collected by NASA’s Osiris-Rex spacecraft, which spent more than two years observing the asteroid. Last October, Osiris-Rex also successfully collected samples from Bennu. The spacecraft is now on a trip back to Earth, with NASA expecting its arrival in September 2023. 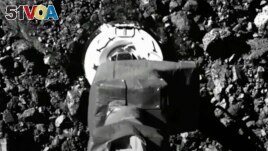 In this image taken from video released by NASA, the Osiris-Rex spacecraft touches the surface of asteroid Bennu on Tuesday, Oct. 20, 2020. (NASA via AP)

The main goal of the Osiris-Rex mission was to collect the samples. Scientists say they hope the material can help them better understand how planets formed and how life began on Earth.

But new data from Osiris-Rex also permitted scientists to get a better idea about Bennu’s current and future movements, including the chances that it could strike Earth. The new details recently appeared in a study in the publication Icarus.

One of the study’s findings is a prediction that Bennu will make a close pass to Earth in 2135. At that time, scientists say the asteroid will pass Earth within half the distance of Earth to the moon.

Even though the new prediction increases the chances of a hit by Bennu, NASA researchers who spoke to reporters about the finding said people should not be overly concerned.

“We shouldn't be worried about it too much,” said Davide Farnocchia, the lead writer of the study. He is a scientist with NASA's Center for Near Earth Object Studies at the Jet Propulsion Laboratory (JPL) in California.

Farnocchia noted that the risk from Bennu “is smaller than from the undiscovered population of objects of similar size.” He added that “overall, the situation has improved” because scientists now have a much better idea of Bennu’s path.

Lindley Johnson is NASA’s planetary defense officer. He was asked about the destruction that could result from a possible strike by Bennu. He said a hit would not destroy all life on Earth. But the event would create a crater about 10 to 20 times the size of the asteroid. Bennu is thought to be about 500 meters wide.

Johnson added that the total area of destruction from a hit would be much larger, covering an area up to 100 times the size of the crater. He noted that there could be other, yet undiscovered objects out there that could present more of a threat.

"We are still looking for what we don't know out there -- the objects that haven't been found yet," Johnson said. He noted that researchers were also studying ways to redirect the orbit of an asteroid should it ever become necessary to do so.

But Johnson added: "We really don't think we need to do anything about Bennu."

Bryan Lynn wrote this story for VOA Learning English based on reports from NASA, The Associated Press, Agence France-Presse and Icarus. Hai Do was the editor.

asteroid – n. one of many large rocks that circle the sun

mission – n. a flight by an aircraft or spacecraft to perform a specific task

crater – n. a round hole made by an explosive force such as a bomb or an object falling from the sky