VOA Special English
Paying Real Money for Virtual Clothing
Update Required To play the media you will need to either update your browser to a recent version or update your Flash plugin.
By Susan Shand
2021/8/15


An avatar is an electronic image that represents a certain person in a video game. So people who play video games want their avatars to look good. And they care what their avatars are wearing.

One game company, Decentraland, announced in June that players could design and sell clothing for their avatars to wear in the game. Not real clothes made from fabric – just clothing designs.

The idea of spending real money on clothing that does not physically exist is confusing to many people. In the virtual world of video games, however, these sales can make big money. They are used in online environments where people gather, meet friends and play games.

Hiroto Kai lives in the American state of New Hampshire. His real name is Noah. A digital artist, he began designing Japanese-style clothing at night.

Kai said he sold kimonos for $140 each and earned about $15,000 in three weeks. After earning a lot of money making virtual Japanese clothing, he quit his job at a music store to design full-time.

"It was a new way to express yourself and it's walking art, that's what's so cool about it... When you have a piece of clothing, you can go to a party in it, you can dance in it, you can show off and it's a status symbol,” he said.

Kai's kimonos include beautiful blue fabric with golden dragons, all virtual, of course. 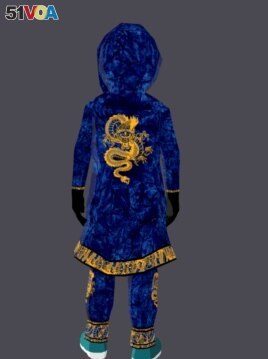 An undated handout image of virtual clothing piece "The Blue Dragon Warrior" kimono, a wearable item in the digital world of "Decentraland", which according to its creator Hiroto Kai it's his "first mythic wearable creation, one out of ten ever created".

In Decentraland, clothing for avatars – also called "wearables" – can be bought and sold, but not for dollars.

NFTs became popular earlier this year, as believers in cryptocurrency began to buy possessions that only exist in the virtual world, such as digital art or land in an online game.

This new virtual world has gotten the attention of some of the world’s biggest fashion companies. They want to develop online fashion into a real part of their industry.

Louis Vuitton has launched a game where players can collect NFTs. Burberry has created products for Blankos Block Party, a game owned by Mythical Games. And Gucci has sold clothing for avatars within the game Roblox .

"Your avatar represents you," said Imani McEwan, a Miami-based fashion model and NFT buyer. "Basically, what you're wearing is what makes you who you are."

McEwan says he has spent $15,000 to $16,000 on 70 NFT wearable pieces since January. He used money he made from cryptocurrency investments. He recently bought a black hat designed by his friend.

The size of the NFT wearable market is difficult to know. In Decentraland, wearable sales came to about $750,000 in the first six months of 2021. The information comes from NonFungible.com, a company that follows the NFT market.

Julie Schwartz is the director of Republic Realm, a virtual investment company. The company recently built a shopping area inside Decentraland. Game players can shop for virtual wearables or real pieces that will be shipped to their homes.

Paula Sello and Alissa Aulbekova are co-founders of the digital fashion company Auroboros. They say this new kind of shopping is more environmentally friendly. Buyers send Auroboros an image of themselves and have clothing designs digitally added for a cost of $80 to $1,300.

Then, there are virtual shoes from the company RTFKT. The company sells NFTs representing shoes that can be worn in games or on social media. The business grew a lot “when COVID started and loads of people went more online,” said Steven Vasilev, the company’s co-founder.

Reuters reported this story. Susan Shand adapted it for Learning English. Hai Do was the editor.

virtual – adj. existing or occurring on computers or on the Internet

style – n. a particular way in which something is done, created, or performed

kimonoa - n. loose piece of clothing with wide sleeves that is traditionally worn on formal occasions in Japan

status – n. the position or rank of someone or something when compared to others in a society, organization, group