Footprints discovered in New Mexico suggest that early humans were in North America around 23,000 years ago, researchers reported recently.

The fossilized footprints were found in a dry lake in White Sands National Park in 2009. Scientists at the U.S. Geological Survey recently studied seeds stuck in the footprints to estimate their age. Evidence suggested they were from 21,130 to 22,800 years ago.

The findings may help scientists answer a basic question: When did people first arrive in the Americas, after spreading out from Africa and Asia?

Most scientists believe the migration path included land, now underwater, that linked Asia with what is now the state of Alaska.

Past research has suggested that humans arrived in the Americas from 13,000 to 26,000 years ago. Such findings were based on different kinds of evidence — including stone tools, fossil bones and genetic studies. 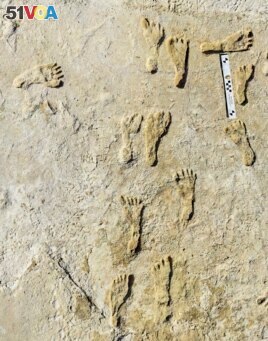 This undated photo made available by the National Park Service in September 2021 shows fossilized human fossilized footprints at the White Sands National Park in New Mexico. According to a report published in the journal Science on Thursday, Sept. 23, 202

The recent study gives a more solid baseline for when humans were in North America.

“What we present here,” they said, “is evidence of a firm time and location."

Location means a place or position.

Based on the size of the footprints, researchers believe that some were made by children who lived during the last ice age.

David Bustos, the park’s resource program manager, saw the first footprints in ancient wetlands in 2009. He and others found more in the park over the years.

“We knew they were old, but we had no way to date the prints before we discovered some with (seeds) on top,” he said.

Bustos said the researchers had to work quickly and carefully to secure pieces of the footprints for study. The footprints were made of extremely fine earth material and could easily be damaged.

“The only way we can save them is to record them — to take a lot of photos and make 3D models,” he said.

Christina Larson reported on this story for the Associated Press. John Russell adapted it for Learning English. Caty Weaver was the editor.

footprint – n. a track or mark left by a foot or shoe

fossilized – adj. having been changed into a fossil. A fossil is something (such as a leaf, skeleton, or footprint) that is from a plant or animal which lived in ancient times

artifact – n. a simple object (such as a tool or weapon) that was made by people in the past

modify – v. to change some parts of (something) while not changing other parts

conventional – adj. used and accepted by most people : usual or traditional