U.S. and Canadian researchers have recently completed identifying all the genetic information of lake trout. The digital map could help efforts to rebuild populations of the fish in North American lakes, officials said this week.

The map is called a reference genome. It will help explain qualities that helped the species to evolve and spread across a large area.

Marc Gaden is a spokesman for the Great Lakes Fishery Commission. It is a U.S.-Canadian agency that financed the research. 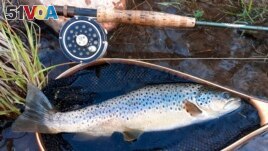 This May 6, 2020, photo, shows a wild brown trout taken on a dry fly from a Catskills river outside Roscoe, N.Y. Fishing shops in Roscoe that should be overflowing with anglers are empty, due to the coronavirus outbreak.

Lake trout numbers have been hurt by invasive species, overfishing and pollution. Gaden said data from the project will give information for programs that fill lakes with young trout.

The team of experts published their report in Molecular Ecology Resources in early August.

William Taylor, chairman of the fishery commission and a Michigan State University fisheries ecologist, described the map as “a...missing link in our efforts to restore lake trout.”

Lake trout once were common in the Great Lakes of the Northeastern United States. And they are still common in other large North American lakes.

Their numbers in the Great Lakes decreased in the 1900s with the invasion of the sea lamprey, an eel-like creature that attaches to fish and sucks their bodily fluids. Researchers developed a poison that is put into rivers where the lamprey reproduce, keeping their numbers from getting too high.

But habitat loss, overfishing and pollution have hurt efforts to bring back the lake trout. Although they can live for 20 years or more, it takes about seven years for lake trout to become sexually mature. Many do not survive long enough to reproduce.

Agencies continue to release them into all the Great Lakes except Lake Superior, where they have recovered well, Gaden said.

Genomes of salmonids, a family of fish that includes lake trout, are harder to complete than those of many other animals, the research team said.

Seth Smith of Michigan State University was the study’s lead writer. Smith suggested the map makes it “easier to compare results across studies, and will hopefully quicken the pace of scientific discovery.”

Shawn Sitar is a fisheries research biologist with the Michigan Department of Natural Resources. He was not involved with the study.

Sitar said returning lake trout to their important position in the Great Lakes will require understanding differences between lake trout at the sub-species level. He said the genome research will support this effort.

John Flesher reported on this story for the Associated Press. John Russell adapted it for Learning English. Mario Ritter, Jr. was the editor.

habitat – n. the place or type of place where a plant or animal naturally or normally lives or grows

type –n. a particular kind of something

pace – n. the speed at which someone or something moves

restore –v. to bring back to an earlier or more numerous condition

ecosystem – n. everything that exists in a particular environment

integrity – n. the state of being complete or whole

originally –adv. in the beginning; the ways something was at a much earlier time