Scientists in Estonia say they have found a way to use a soil-like material to produce batteries.

The material is peat, a dark substance made of decomposed plants. Peat is widely available in areas across northern Europe.

Researchers from Estonia’s Tartu University say they have found a way to use peat in sodium-ion batteries. This kind of battery is one of several new technologies being considered to replace widely used lithium-ion batteries.

Lithium-ion batteries power everything from smartphones to computers to electric vehicles.

Sodium-ion technology reduces the cost of the battery production process. This is because the batteries contain sodium instead of costly materials such as lithium, cobalt or nickel.

Enn Lust is head of the Institute of Chemistry at Tartu University. He told reporters with Reuters news agency that peat “doesn't cost anything, really."

The battery-making process includes heating the decomposed peat to a high temperature for two to three hours. The university is seeking government support to finance a small factory in Estonia to test the technology. 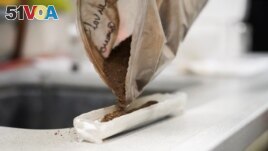 Peat is commonly found in wet areas known as bogs. It is used by whisky makers in Scotland. Some northern European countries use the material to fuel factories and homes. It is also added to soil to help plants grow.

During the collection process, bogs are drained to mine peat. Trapped carbon dioxide is released into the air. This has raised environmental concerns. But the Estonian scientists say their process uses decomposed peat. This a waste product of traditional collection methods. It is usually thrown away.

Lukasz Bednarski is a battery materials expert. He told Reuters that sodium-ion batteries using peat will need to prove to be profitable and easily produced in large numbers.

Bednarski said, "I think that companies will increasingly try to commercialize the sodium-ion battery, especially after the CATL announcement.”

He added that less powerful sodium-ion batteries are likely to be used together with lithium-ion technology to bring down the overall cost of battery systems.

Reuters reported on this story. Bryan Lynn adapted the report for VOA Learning English. Ashley Thompson was the editor.

battery – n. an object that provides and stores electricity for things

commercialize – v. to organize something to make a profit

whisky – n. a strong alcoholic drink made from grain

replace – v. to start using another thing instead of the one that was being used before