For the most part, humans are still necessary for operating what are supposed to be self-driving vehicles. This situation highlights the difficulties facing the automated vehicle industry, which has gotten billions of dollars in investor money over the past decade.

In the past year, self-driving startups like Cruise and Pony.ai have begun testing their driverless cars in some parts of California. These cars have human operators.

The human is not “driving,” but sitting in the passenger seat. Called a safety operator, the human "has a red button that can stop the vehicle just in case anything happens," Pony.ai CEO James Peng told the Reuters news agency. 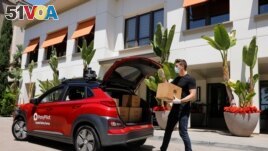 The operator will be removed next year when Pony.ai, whose investors include Toyota Motor Corp., sends out its driverless vehicles in some areas of California. Still, an operator will supervise vehicles from a distance and give help when the vehicles run into trouble, Peng said.

Cruise is majority-owned by General Motors. It started operating five driverless vehicles in San Francisco at night in October 2020. A human was in the front seat. The person has "the ability to stop the vehicle at any point during the ride," a Cruise spokesman told Reuters.

"Cruise views the development of self-driving vehicles as not only a tech race, but also a trust race,” the spokesman said. He added that humans help with safe driverless vehicle development and help "build trust with the public."

In the face of many technical and legal difficulties, some self-driving companies are accepting the need for human minders. The goal is to make money in the near future, investors and startup executives say.

Tesla Inc. recently launched a new test version of what it calls “Full Self-Driving" software. The company said in a message to owners that drivers should "be prepared to act immediately, especially around blind corners, crossing intersections, and in narrow driving situations.”

In a statement to Reuters, the California Department of Motor Vehicles said state laws "call for a two-way communication link that allows the manufacturer to continuously monitor the (driverless) vehicle’s” location and status.

Other companies are using remote operation – operating vehicles from a distance - as a way to get vehicles on the road.

In Las Vegas, startup Halo allows customers to call a driverless car, which is driven by a remote human operator over wireless networks operated by T-Mobile US Inc.

"Just a few years back, remote human assistance was a dirty little secret in this space," Katz said.

Katz suggested many developers hoped for vehicles that drove without any human assistance, doing “everything that a human driver would do."

He added: "Everyone now knows that's not going to be the case."

Hyunjoo Jin and Nathan Frandino reported on this story for Reuters. John Russell adapted it for Learning English. Susan Shand was the editor.

automate – v. to run or operate (something, such as a factory or system) by using machines, computers, etc., instead of people to do the work

button – n. a small area on a computer screen that you click on to make the computer software do something

intersection – n. the place where two or more streets meet or cross each other

monitor – v. to watch, observe, listen to, or check (something) for a special purpose over a period of time

status – n. the current state of someone or something — usually singular