VOA Special English
Study: Just 7 Percent of Our DNA Is Special to Modern Humans
Update Required To play the media you will need to either update your browser to a recent version or update your Flash plugin.
By Gregory Stachel
2021/7/25


A new study finds that just seven percent of the genome, or all genes, of modern humans is special to that group. It suggests today’s humans are extremely similar genetically to their ancestors from tens of thousands of years ago.

The research appeared in the publication Science Advances.

“That’s a pretty small percentage,” says Nathan Schaefer, a biologist, or life scientist, at the University of California, and a leader of the research.

“This kind of finding is why scientists are turning away from thinking that we humans are so vastly different from Neanderthals,” he said.

The Neanderthal human group died out around 40,000 years ago.

The research used DNA taken from the remains of Neanderthals and other early human groups called Denisovans. The scientists compared the DNA to that from 279 living people from around the world.

Scientists already knew that modern people share some DNA with Neanderthals, but different people share different parts of that genome. One goal of the new research was to identify the genes that only modern humans have. 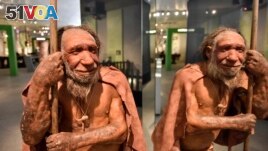 A reconstruction of a Homo neanderthalensis, commonly known as Neanderthals. Neanderthals lived within Eurasia from around 400,000 until 40,000 years ago. Shown at the Neanderthal Museum in Mettmann, Germany, located at the site of the first Neanderthal man discovery, Wednesday, July 3, 2019.

John Hawks is a paleoanthropologist, a scientist that researches human origin and development, at the University of Wisconsin, Madison. He was not involved in the study. He said establishing the genes shared by the groups is mathematically difficult. He praised the researchers for their work. They “developed a valuable tool that takes account of missing data in the ancient genomes,” Hawks said.

The research also showed that an even smaller percentage of the modern human genome, 1.5 percent, is singularly shared among humans of today. Those few genes could answer what truly makes modern human beings different.

Richard Green is a biologist at the University of California, Santa Cruz and one of the writers of the paper. He said the genome areas shared only among today’s humans are “highly enriched” for genes dealing with brain development and function.

In 2010, Green helped produce the first outline of a Neanderthal genome. Four years later, geneticist Joshua Akey co-wrote a paper showing that modern humans carry some Neanderthal DNA. Since then, scientists have continued to develop ways to take and study genetic material from fossils.

Akey is now at Princeton and was not involved in the new research. But he also praised the study. Better tools, he said, permit scientists to “ask increasingly more detailed questions about human history and evolution.”

Alan Templeton is a geneticist at Washington University, St. Louis. He questioned one of the findings reported by the investigators. The scientists assume, he said, that human genome changes are randomly spread.

Instead, Akey argues the findings show “that we’re actually a very young species,” said Akey. “Not that long ago, we shared the planet with other human lineages.”

Christina Larson reported this story for The Associated Press. Gregory Stachel adapted it for VOA Learning English. Susan Shand was the editor.

pretty –adv. to a great degree or extent

function –n. the special purpose or activity for which a thing exists or is used

evolution –n. a theory that the differences between modern plants and animals are because of changes that happened by a natural process over a very long time

assume –v. to think that something is true or probably true without knowing that it is true

lineage –n. the people who were in someone's family in past times