An international rights group says the United States should accept millions of refugees who will be forced to flee the effects of climate change.

Refugees International is a group that supports displaced people around the world. It released its report Wednesday.

The group says the United States “has a special responsibility to lead on issues of climate change, migration and displacement.” 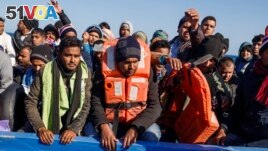 FILE - Migrants from Bangladesh, Afghanistan and Pakistan wait for being taken to the Spanish NGO Maydayterraneo's Aita Mari rescue boat during the rescue of 65 migrants in the Mediterranean international waters off the Libyan coast on February 10, 2020. (Pablo Garcia / AFP)

The Institute of Economics and Peace is a not-for-profit research group based in Australia. It estimates that as many as 1.2 billion people around the world could be displaced by 2050.

Refugees International created a task force in the spring to produce its report. It is made up of former U.S. government and United Nations officials. Leaders of non-governmental groups and climate experts are also involved.

Their report urges that: “From Haiti and Honduras to Bangladesh, Burkina Faso and thousands of communities in both the Global South and Global North, those at risk need policy solutions today.”

Kayly Ober is with Refugees International. She said her group “believes that the Biden administration should acknowledge the reality of climate-related migration and offer new forms of protection and support” for the displaced.

The task force is also advising that the U.S. should recognize people displaced by climate change face “what would amount to persecution” under the 1951 United Nations treaty on refugees.

In February, U.S. President Joe Biden asked National Security Advisor Jake Sullivan to examine how to identify and resettle people who will be displaced by climate change.

A top administration official told VOA that the administration is “actively working on a report on climate change and its impact on migration, including forced migration, internal displacement and planned relocation.” The official said that a version of the report would be made public by the fall.

U.S. Senator Edward Markey of Massachusetts, a Democratic Party member, is supporting legislation on that issue. It would offer support for people fleeing climate change events who do not meet the definition of a refugee under international law.

Opposition to the group’s proposals

Some lawmakers and immigration policy groups are likely to oppose any expansion of immigration.

Ira Mehlman is with the Federation for American Immigration Reform, a group that calls for changes to immigration policy. He said the proposal from Refugees International’s task force would harm America’s ability to deal with the causes of climate change.

Mehlman noted that the American immigration system is already struggling with more than 1.3 million asylum cases. He added that inviting millions of people to be considered refugees based on claims “of harm as a result of climate change would cause the system to collapse.”

Roy Beck is with the group NumbersUSA, which calls for immigration restrictions. Beck called the task force’s proposal for few immigration limits “problematic.” He said that migration and refugee resettlement harm “the ability of lower-skilled Americans” and minorities to get and hold jobs.

Earlier this year, Biden announced the U.S. would increase climate-related aid for developing countries by 2024 compared to spending under former President Barack Obama. For the financial year of 2022, Biden has called for spending $2.5 billion on international climate programs.

Ober of Refugees International praised the administration for the effort to deal with the issues of climate change and migration. The group said Biden’s proposed spending is notable but still less than what experts want.

The group's report said $2.5 trillion in spending is needed worldwide.

Steve Herman reported this story for VOA News. Mario Ritter Jr. adapted it for VOA Learning English. Hai Do was the editor.

solutions –n. something that is done to deal with and end a problem

impact –n. a powerful or major influence or effect

internal --adj. existing or taking place inside something such as within the borders of a country

relocation –v. to move to a new place

acknowledge –v. to accept or not deny that something is true, correct or exists; to admit

persecution –n. the cruel or unfair treatment of a person, especially for reasons of politics, religion or race