The head of Haiti’s national police said four suspects in the assassination of President Jovenel Moise were killed in a shootout with police.

Police Chief Léon Charles told reporters that two other suspects were arrested during the shootout late Wednesday. He described them as “mercenaries.” Three police officers who were being held by the suspects were also freed.

The search for the killers began shortly after Moise was killed during an early Wednesday morning attack at his home in the capital city of Port-au-Prince. Video obtained by the national police appears to show the assassins posed as agents of the U.S. Drug Enforcement Agency.

Bocchit Edmond is Haiti’s ambassador to the United States. He told VOA that he was not certain of the gunmen’s nationality. But interim Prime Minister Claude Joseph said the gunmen spoke English and Spanish. Most people in Haiti speak French or Haitian Creole. Joseph also declared a state of emergency and said he was the country’s new leader. His hold on power, however, is uncertain.

Earlier in the week, President Moise nominated Ariel Henry to replace Joseph as the country’s new prime minister. But Henry has yet to be sworn in. The New York Times reported Henry told a Haitian newspaper said that Joseph is “no longer Prime Minister.” He also claimed the office for himself.

Joseph is Haiti’s sixth prime minister in the past four years. The country has no working parliament. And the head of the country’s highest court died last month of COVID-19.

First lady Martine Moise was also shot during the attack. She is in stable, but critical condition, the ambassador said. She has been moved to a hospital in Miami, Florida, for treatment. One of the president’s children who was home during the attack has been taken to a secure place. 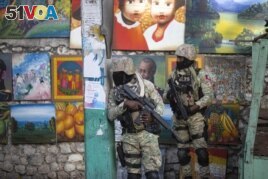 U.S. President Joe Biden, in a statement, condemned Moise’s assassination and wished for the first lady’s recovery. He added the U.S. stands “ready to assist as we continue to work for a safe and secure Haiti.”

In Washington, members of the Organization of American States held an emergency meeting Wednesday and condemned the killing.

In New York, the United Nations Security Council president, French Ambassador Nicolas de Riviere, said the council was deeply shocked by the assassination. The council will meet privately Thursday morning to discuss events. The U.N. has about 1,200 staff in Haiti as part of its political mission there.

Amnesty International is calling for an investigation into Moise’s assassination, calling it a sign of the “serious human rights and political crisis that Haiti has been facing for years.”

Haiti has been experiencing political instability and division, as well as a rise in gang violence.

Last week in Port-au-Prince, gang leader Jimmy Cherisier took to the streets to protest Moise's government, calling for his resignation.

“Jovenel (Moise) must go!” Cherisier told reporters during the protest. “A new group of people needs to lead this country, and we must sit together around a table, have a national dialogue so we can redefine this country.”

VOA’s Sandra Lemaire reported this story. Susan Shand adapted it for Learning English with additional reporting from Reuters. Hai Do was the editor.

assassination – n. the act of killing (someone, such as a famous or important person) usually for political reasons

mercenary – n. a soldier who will fight for any group or country that hires him

interim - n. a period of time between events

stable – adj. in a good state or condition that is not easily changed or likely to change

gang – n. a group of young people who do illegal things together and who often fight against other gangs

dialogue – n. a discussion or series of discussions that two groups or countries have in order to end a disagreement