An 18-year-old gunman killed at least 19 students and two teachers at a elementary school Tuesday in the American state of Texas. Several other people hurt in the attack remain at local hospitals.

The attack took place at the Robb Elementary School in Uvalde, Texas. Officials said the gunman locked himself inside a fourth-grade classroom and started shooting. He used a rifle purchased just days ago, after his 18th birthday. The attack ended when law enforcement officers broke into the classroom and killed the shooter.

Lieutenant Christopher Olivarez of the Texas Department of Public Safety told CNN that the gunman "barricaded himself by locking the door and just started shooting children and teachers that were inside that classroom." 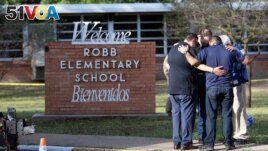 People gather at Robb Elementary School, the scene of a mass shooting in Uvalde, Texas, U.S. May 25, 2022. (REUTERS/Nuri Vallbona)

Officials identified the gunman as Salvador Ramos. He was a member of the community in the mainly Hispanic town of Uvalde. The town is about 135 kilometers west of San Antonio and near the Mexico border.

Ramos, officials said, acted alone. He had shot his grandmother earlier and crashed his car before entering the school. The attack happened just two days before the last day of the school year.

The attack was the deadliest shooting at an elementary school since the attack at Sandy Hook Elementary School in Newtown, Connecticut. A local gunman killed 20 students and six adults in 2012.

Tuesday night, American President Joe Biden addressed the nation shortly after his return from a five-day trip in Asia.

"To lose a child is like having a piece of your soul ripped away," Biden said. "As a nation, we have to ask: When in God's name are we going to stand up to the gun lobby? When in God's name will we do what we all know in our gut needs to be done?"

The president also said, "These kinds of mass shootings rarely happen anywhere else in the world."

The elementary school shooting in Texas came just 10 days after another gunman killed 10 people at a food store in Buffalo, New York.

The Gun Violence Archive said there were 15 more mass shootings that were not widely reported between the two shootings. The independent organization reported 213 mass shootings so far in 2022.

The organization defines a mass shooting as an incident in which four or more people are shot. It collects its information from law enforcement, government, and other sources.

What to do about gun violence?

Every mass shooting in the United States seems to show the political division in the country.

"The idea that an 18-year-old kid can walk into a gun store and buy two assault weapons is just wrong," Biden said.

The Democratic Party president had asked the Senate to pass bills from the House of Representatives. The proposed laws would require background checks and longer waiting periods for gun purchases. The Senate does not have the 60 votes required to overcome an expected filibuster from Republican Party senators. Other measures included a so-called "red flag" law meant to take guns away from people with mental health problems.

On Tuesday night, Biden said, "For every parent, for every citizen in this country, we have to make it clear to every elected official in this country: It's time to act."

Ted Cruz is a Republican Senator from the state of Texas. He told MSNBC news, "We know from past experience that the most effective tool for keeping kids safe is armed law enforcement on the campus." Cruz also said that after every mass shooting, Democrats' and the news media's solution is to call for restrictions on gun rights.

Cruz and other Republicans, including former President Donald Trump and Texas Governor Greg Abbott, will speak before the gun rights lobbying group, the National Rifle Association, this Friday.

Hai Do wrote this report for VOA Learning English.

barricade –v. to block a door or entrance so that people cannot get in or leave

lobby –v. to try to influence government officials to make decision for or against a policy or to vote for a bill

background check –n. an investigation of records and information about a person to find out if they are qualified to receive or be permitted to something

filibuster –n. an effort to prevent a legislature (such as the U.S. Senate) from considering a bill by making long speeches or otherwise blocking the legislation from consideration