The move came after the president suspended the legislature and dismissed the prime minister following nationwide protests. Protesters were angry over the country’s economic troubles and the government’s handling of the coronavirus crisis.

Protesters celebrated President Kais Saied’s decision on Sunday. They shouted with happiness and waved Tunisian flags. But the president’s critics accused him of seizing too much power. 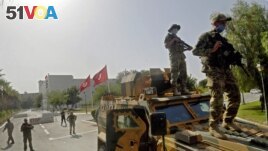 Tunisian military forces guard the area around the parliament building in the capital Tunis on July 26, 2021, following protests in reaction to a move by the president last night to suspend the north African country's parliament and dismiss the Prime Mini

The North African country’s allies expressed concern that its young democracy might fail. In a move sure to increase those worries, police took over the offices of broadcaster Al Jazeera and ordered it to shut down.

In 2011, Tunisia began the so-called Arab Spring when protests led to the overthrow of several, longtime Middle Eastern leaders. The country is often considered the only success story of those uprisings.

But democracy did not bring economic growth. Tunisia’s unemployment rate was 18 percent before the pandemic hit. Young people protested, demanding jobs and an end to police violence earlier this year.

The government recently announced cuts to food and fuel subsidies. This caused more anger in areas of the country with many poor people. The government is seeking its fourth loan from the International Monetary Fund in the last ten years.

The pandemic has only worsened the economic problems. The government recently announced new stay-at-home orders and other virus restrictions. But thousands of protesters ignored virus restrictions in the capital, Tunis, and other cities Sunday. They demanded the suspension of parliament. Mostly young people, the protesters shouted “Get out!” and fought with police.

The president said he had to fire the prime minister and suspend parliament because of concerns over public violence. He said he acted within the law. Parliament speaker Rached Ghannouchi, however, said the president did not discuss the situation with him or the prime minister as required. Ghannouchi heads the Islamic party that controlled the legislature. The three men have been in conflict.

“We have taken these decisions...until social peace returns to Tunisia and until we save the state,” Saied said on television. He said there would be severe reactions to anyone who threatened public peace.

On Monday, police tried to prevent fighting outside the parliament building between lawmakers from the Ennahdha Party and protesters supporting the president.

Ghannouchi, the speaker, tried to enter parliament overnight, but police and military forces guarding the building stopped him. On Monday morning, he was in a car in front of the building. His next steps are unclear.

He called the president’s move “a coup against the constitution and the (Arab Spring) revolution,” and said parliament would continue to work.

Problems between the prime minister and president have been blamed for poor management of the virus, including a vaccination drive so badly executed that the health minister was removed from his job.

To date, only seven percent of the population has been fully vaccinated. More than 90 percent of the country’s emergency-care hospital beds are being used, health ministry information says. There are videos on social media showing dead bodies left in hospital beds. And morgues are struggling to deal with the number of deaths.

The Ennahdha Party has been a target of protesters, who accuse it of caring more about politics than dealing with the virus.

On Monday, security forces took over the Tunis offices of Al Jazeera, the network wrote on its Facebook page. The reason for the move was not clear.

Al-Jazeera journalists said 10 “heavily armed police officers” entered their office without a warrant and asked everyone to leave. “The reporters’ phones and other equipment were confiscated, and they were not allowed back into the building,” the organization said.

The president’s move has gotten him support in some areas, but also caused concern.

A German Foreign Ministry spokesperson said the government is “very worried” by the events in Tunisia and is in discussion with Tunisian officials.

Turkey’s government said it was “deeply concerned” by the suspension of parliament and called for a return to democracy.

The Associated Press reported this story. Susan Shand adapted it for Learning English. Mario Ritter, Jr. was the editor.

subsidy – n. money paid by the government to keep the price of a product or service low or to help a business or organization continue

coup (d'état) – n. a sudden attempt by a small group of people to take over the government usually through violence

morgue – n. a place where the bodies of the dead are kept before burial or cremation

confiscate – v. to take something away from people especially as punishment or to enforce laws or rules