VOA Special English
UN Report: ‘Nowhere to Run’ from Global Warming
Update Required To play the media you will need to either update your browser to a recent version or update your Flash plugin.
By Jill Robbins
2021/8/9


The United Nations called a "code red for humanity" in a recently released report on climate change. A “code red” describes a serious emergency.

The U.N. report said the Earth’s atmosphere is getting so hot that temperatures in 10 years will probably pass a dangerous level.

Linda Mearns is a climate scientist at the U.S. National Center for Atmospheric Research and a co-writer of the report. She said, "It's just guaranteed that it's going to get worse. Nowhere to run, nowhere to hide."

But scientists also reduced their predictions of the worst climate disasters.

The Intergovernmental Panel on Climate Change (IPCC), a group formed by the U.N., released the report which calls climate change human-caused. The IPCC makes more exact predictions for the next 80 years than it did the last time it released a report in 2013.

The UN group predicts five possible situations that might take place in the future. They are based on how much carbon gas emissions are cut by nations around the world.

Each one of the possible situations meets the warming levels set in the 2015 Paris climate agreement. 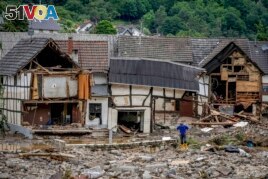 In that agreement, many world leaders said they would try to limit the average warming of the Earth’s atmosphere. The number was set at 1.5 degrees Celsius above the average temperature levels in the 1800s before industrialization spread around the world. The Paris climate agreement also talked about permitting a 2-degree rise in the Earth’s average temperature. The report’s scientists said the atmosphere has already warmed 1.1 degrees Celsius since then.

Under each possible situation, the report said, the world will cross the 1.5-degree-Celsius mark in the 2030s. That is earlier than some past predictions. The report’s scientists said warming has increased in recent years.

Valerie Masson-Delmotte is the co-chair of the report. She also is a climate scientist at France's Laboratory of Climate and Environment Sciences at the University of Paris-Saclay. She said, "Our report shows that we need to be prepared for going into that level of warming in the coming decades. But we can avoid further levels of warming by acting on greenhouse gas emissions."

In three of the five possible situations, worldwide average temperatures will warm by more than 2 degrees Celsius over pre-industrial times. That is the higher temperature limit under the Paris climate agreement. The scientists predict reaching this level will cause severe heat waves, droughts and flooding rainstorms. The report warns this will happen unless nations sharply cut their carbon gas emissions.

IPCC Vice Chair Ko Barrett is a climate adviser for the U.S. National Oceanic and Atmospheric Administration. "This report tells us that recent changes in the climate are widespread, rapid and intensifying, unprecedented in thousands of years," he said.

Worldwide meeting to come in Scotland

The U.N. says 721 experts took part in the report which is nearly 4,000 pages long. It said the warming atmosphere is already causing many unusual and harmful weather events. All these events will get worse, the report said. In some places, warming is causing more than one problem at a time.

Examples of places with such dangerous weather are the Western U.S., where heat waves, drought and wildfires increase the damage, Mearns said. Extreme heat is also causing fires in Greece and Turkey.

Cutting methane is one way to reduce warming

Mason-Delmotte said improvement in understanding of how fast the world warms with each ton of carbon dioxide emitted enables scientists to be far more exact in their predictions of the future.

Zeke Hausfather is a co-writer of the report and a climate scientist with the Breakthrough Institute, an environmental group in California. He said, the chances of “ending up in a much worse place than we expected if we do reduce our emissions are notably lower."

More than 100 countries have made unofficial promises to reach "net zero" human-caused carbon dioxide emissions sometime around 2050. Those promises will be a part of the negotiations in Scotland. The report said those promises are necessary.

IPCC Vice Chair Barrett said it is still possible to avoid most of the worst possible results.

Additional information: For the first time, the report offers an interactive atlas for people to see what has happened and may happen to where they live.

Seth Borenstein reported on this story for the Associated Press. Jill Robbins adapted it for Learning English. Mario Ritter, Jr. was the editor.

emissions – n. something sent out or given off, such as the harmful substances released into the air by automobiles

greenhouse gas –n. a gas that is believed to cause warming temperatures in the Earth’s atmosphere

unprecedented –adj. not done or experienced before

stark – adj. unpleasant and difficult to accept or experience

What do you think of the U.N. report on climate change? We want to hear from you. Write to us in the Comments Section.