A leader of the U.S. government-run weather agency said he expects a record-setting hurricane season this summer for the Atlantic Ocean.

Rick Spinrad is the administrator for NOAA, the National Oceanic and Atmospheric Administration. He told the Associated Press that the summer season in the Atlantic will produce from 14 to 21 large storms. About half of them will become the powerful storms known as hurricanes. Three to six of them will turn into major hurricanes with winds measuring about 200 kilometers per hour.

The number of damaging storms changes over long periods of time. Over 30 years, the number of large storms was about 14. But in 2020, there were 30 and last year there were 21. 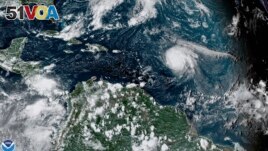 The strength of a hurricane is shown by its category. Category 5 storms have the highest measured wind speeds. Spinrad said, in the past five years, the number of Category 4 or 5 storms that reached land in the United States was more than all such storms in the 50 years before that.

He said this year will be "similar" to past years and warned "if you fail to plan around this outlook, you're planning to fail."

He said people who own homes or land in the coastal areas usually affected by storms need to protect their property.

Matthew Rosencrans predicts storms for NOAA. He said all of the things that go into producing big hurricanes are present this year. That includes a heavy rainy season in West Africa. A cooling pattern in the Pacific Ocean known as La Nina that affects weather around the world is another predictor. And warmer ocean temperatures caused by climate change are another.

Other weather experts not associated with NOAA agreed that there will be a higher number of damaging storms this year. They said the La Nina weather event reduces a kind of wind that can lower the strength of hurricanes. As countries around the world reduce pollution, the air has become cleaner, they said. This increases sunlight that makes water temperature rise.

"We're seeing these storms happen more frequently," she said at a news event in New York City. "They're lasting longer."

Criswell said the change in the number of storms that come from climate change is "dramatic."

NOAA said 13 people died in 2021 when Hurricane Ida flooded many cities in the northeastern U.S. Eleven people in New York City who lived in below-ground housing died because of the floods. This year is also the 10-year anniversary of Sandy, a large storm that caused a loss of power and flooding in much of New York City.

NOAA said there is a 65 percent chance that this year's storm season will be "above normal."

Phil Klotzbach researches hurricanes at Colorado State University. He said six straight years with a high ACE, a measure of storm strength, is a record, and "really strange."

Ten other weather teams agree with NOAA. The groups come from the government, universities and private weather companies. The average of their predictions suggests there will be 20 big storms and eight hurricanes. Four of those hurricanes are expected to be major ones.

NOAA predicts the Pacific Ocean will be quieter because of the influence of cool La Nina conditions.

Dan Friedell adapted this story for VOA Learning English based on reporting by the Associated Press.

Write to us in the Comments Section and visit 51VOA.COM.

category – n. a group of things that are similar

pattern– n. something that happens in a repeated way

dramatic- adj. sudden, extreme, or claiming a lot of attention