The closer security relations come more than 40 years after the Vietnam War ended in 1975. President Joe Biden's administration, however, has said there are limits to the relationship unless Hanoi makes progress on human rights. 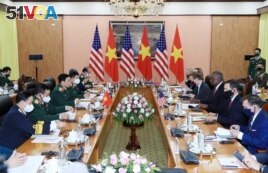 Before a meeting with the Vietnamese defense minister in Hanoi, Austin said the United States is not asking Vietnam to choose between countries.

"One of our central goals is ensuring that our allies and partners have the freedom and the space to chart their own futures," Austin said.

On Sunday, the U.S. shipped 3 million doses of the Moderna COVID-19 vaccine to Vietnam. That raised the amount given to Vietnam by the U.S. through the global COVAX program to 5 million doses.

Greg Poling is with the Center for Strategic and International Studies in Washington, D.C. He said there was a limit to how fast and far the Vietnamese would deepen ties with the Americans.

There are also limits to how far the United States is willing to increase relations if Vietnam does not improve its human rights record.

In a meeting with Austin on Thursday morning, Vietnamese President Nguyen Xuan Phuc said he was looking forward to an upcoming visit by U.S. Vice President Kamala Harris. A source told the Reuters news agency that Harris could be traveling to Vietnam and Singapore in August.

Dan Novak adapted this story for VOA Learning English from reporting by Reuters and The Associated Press. Susan Shand was the editor.

ensure — v. to make (something) sure, certain, or safe

chart — v. to make a plan for (something)

engaged — adj. busy with some activity

basis — n. a reason for doing something