VOA Special English
What Can One Person Do About Global Warming?
Update Required To play the media you will need to either update your browser to a recent version or update your Flash plugin.
By Dan Friedell
2021/8/18


Last week, the United Nations released a report that warned global warming will get worse in the coming years even if humans immediately stopped producing carbon gas. The UN chief described the report as a “code red for humanity.”

The report served as a notice for governments and lawmakers around the world to act. But many people are asking what they can do as individuals to make a difference.

Some people might think making a change to their lives would not make much of a difference, said Pim Nusselder. He is part of a Dutch group that asks people to make good choices every day when it comes to using energy, creating waste and buying things. 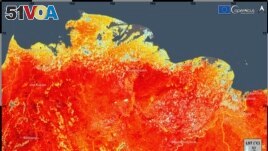 This photo taken on Friday, June 19, 2020 and provided by ECMWF Copernicus Climate Change Service shows the land surface temperature in the Siberia region of Russia. A record-breaking temperature of 38 degrees Celsius was registered in the Arctic town of

Nusselder said people might think their individual choices would be like a single drop of water on a boiling surface.

But, Nusselder explained, if 17 million people do 10 good things, it would be like 170 million drops of water on the hot surface.

The European Union issued a report this year that showed more people than ever are making choices to fight climate change. They are careful about the food they eat and how they get around, the report said.

Nusselder said he understands people may feel “a sense of hopelessness.” But he said the problem becomes bigger, the longer people wait.

Lukas Janssens is one person working to help keep the planet cooler. He is an urban shepherd in Belgium. A shepherd is someone who takes care of sheep. Janssens said he wants his sheep to be useful.

So, he takes his group of 270 sheep to a cemetery – a place where dead people are buried. The sheep eat grass so that workers at the cemetery do not have to use machines to cut it.

He knows that his business, called The Antwerp City Shepherd, will not prevent global warming.

“But it is another step to build a more ecological society,” Janssens said.

After the U.N. report, the question remains: Will world leaders choose to protect the environment when they meet in Scotland in November?

Nations are gathering to make decisions designed to keep warming from going more than 1.5 degrees Celsius above readings taken in the late 1800s. Right now, the temperature has increased 1.1 degrees.

No matter what the world leaders do, there are a lot of ways individual people can make choices to protect the environment. People can change what they eat or travel without getting on an airplane, for example.

Benjamin Clarysse is a bio-engineer who works with a number of environmental groups in northern Belgium. He knows not everyone can become an urban shepherd. But he is happy there are “a variety of initiatives” that people can take.

However, he warns, political leaders still need to promise changes. They cannot just depend on citizens doing their part.

“They cannot just say that everyone should just do a little bit of the work,” Clarysse said. “Depending on just the goodwill of people won’t get you there.”

Raf Casert wrote this story for the Associated Press. Dan Friedell adapted it for Learning English. Ashley Thompson was the editor.

extinguish –v. to cause (something) to stop burning

ecological –adj. a way to describe the relationships between a group of living things and their environment

variety –n. a number or collection of different things

initiative –n. a plan or program that is intended to solve a problem