VOA Special English
Top US Defense Officials Testify about Unexplained Flying Objects
Update Required To play the media you will need to either update your browser to a recent version or update your Flash plugin.
By Bryan Lynn
2022/5/18

The officials told a House Intelligence subcommittee Tuesday the U.S. military is fully prepared to keep investigating the origins of the objects. The Defense Department calls the objects “unidentified aerial phenomena,” or UAPs. UAPs are also commonly known as unidentified flying objects, or UFOs.

The two defense intelligence officials were testifying in the first public congressional hearing on the subject in more than 50 years. The last such hearings took place in the 1960s. 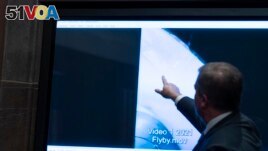 Deputy Director of Naval Intelligence Scott Bray points to a video display of a UAP during a hearing of the House committee hearing on "Unidentified Aerial Phenomena," on Capitol Hill, Tuesday, May 17, 2022, in Washington. (AP Photo/Alex Brandon)

The House hearing came after the release of a U.S. government intelligence report on UAPs last year. That report, ordered by Congress, documented more than 140 cases of UAPs observed by U.S. military pilots since 2004.

One of those testifying at Tuesday’s hearing was Scott Bray. He is deputy director of naval intelligence. He told House members that the official number of UAP sightings recorded by a newly formed Defense Department group had grown to more than 400.

The two officials said investigations were ongoing into the reported sightings. They added, however, that many of the cases remain outside the government’s ability to explain.

Bray told the hearing that, so far, the Defense Department had discovered no "material” suggesting that any of the sightings were “non-terrestrial in origin." However, he added that military and intelligence experts have not ruled that possibility out.

The officials said department investigators aimed to follow any evidence of UAP sightings as far as it leads them. They noted that the military’s main interest in unexplained objects is that they present possible national security threats.

The other official who testified was Ronald Moultrie. He is the Defense Department’s undersecretary for intelligence and security. He also heads the Pentagon’s latest UAP investigative team.

Moultrie told the hearing that UAP sightings by military members represent possible flight safety risks, as well as general security concerns. Because of this, he said, investigators hope to “determine their origins.”

Bray presented two short videos of UAP sightings. One showed flashing, triangle-shaped objects in the sky. The objects were later judged to be elements of light passing through night-vision glasses. The other showed a bright, rounded object speeding past a military aircraft's window. Bray said that sighting remains unexplained.

Last year’s report on UAPs described sightings of unexplained objects that appeared to show speed and movements not seen in existing flying technology. Such objects appeared to lack traditional propulsion or flight control systems. Propulsion is the force that moves something forward. Bray said those incidents, including one described by Navy pilots, are among the cases still considered "unresolved."

The 2021 report said more data and examinations were needed to identify whether such objects might represent new systems being developed by a foreign power such as China or Russia.

The subcommittee's top Republican, Rick Crawford, said he was in favor of the UAP investigative effort. But he added that he was “more interested" in gaining a better understanding of Chinese and Russian hypersonic weapon development.

Hypersonic is a term that relates to speeds of more than five times the speed of sound. In addition to flying at extremely high speeds, hypersonic weapons are also designed to move in ways that make them difficult to find and destroy in flight.

Crawford added: “The inability to understand objects in our sensitive operating areas is tantamount to intelligence failure that we certainly want to avoid.”

Reuters and The Associated Press reported on this story. Bryan Lynn adapted the reports for VOA Learning English.

testify – v. to say what you know or believe is true in a court of law or a congressional hearing

origins – n. the cause of something or where something comes from

aerial – adj. in or from the air, especially from an aircraft

phenomena – n. something that exists or happens, usually something unusual

determine – v. to discover the facts or truth about something

tantamount – adj. to be almost as bad as something else