Scientists say the remains of a young lion found in Russia in 2018 are 28,000 years old and in excellent condition. They say the lion baby, or cub, may still hold some of its mother's milk inside it.

The cub was a female cave lion. Researchers named her Sparta. Her remains were discovered in permanently frozen ground at the Semyuelyakh River in Russia's Yakutia area.

The remains of another ancient cave lion had been found nearby in 2017. It was a male that researchers named Boris. 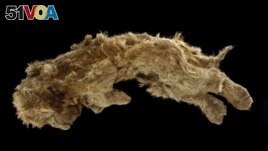 A cave lion cub named Sparta, which was found preserved in Siberia's permafrost, is seen in this undated photo taken in 2020, in Yakutsk, Russia. (REUTERS/Valery Plotnikov)

The findings were part of a study published in the journal Quaternary.

The study said the cubs were found 15 meters from each other. But, the scientists said many generations separated them. The research showed that Boris lived around 43,448 years ago.

Two other lion cubs have also been found in the Yakutia area in recent years.

Valery Plotnikov is one of the study's writers. He told Reuters that Sparta was so well preserved that it still had its fur, organs and skeleton.

"The find itself is unique; there was not any other such find in Yakutia," he said.

Plotnikov added that the scientists hope to find evidence of mother’s milk inside Sparta in order to learn what cave lions ate.

Similar finds in Russia's larger Siberian area have increased in recent years. Climate change is warming the Arctic faster than the rest of the world. That increase in temperature has melted the ground in some areas that were permanently frozen.

Jonathan Evans adapted this story for Learning English based on a report from the Reuters news service. Caty Weaver was the editor.

unique - adj. used to say that something or someone is unlike anything or anyone else